Jessica Studdert argues that all the evidence shows we need to make some major changes to how we fund and operate social care, and they need to be done soon. 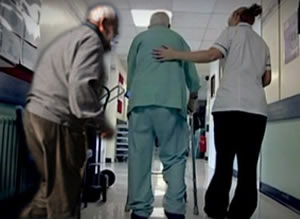 By Jessica Studdert, political adviser to the LGA Labour Group

Confirmation that cross-party talks to find a way to overhaul the English adult social care system will begin again this month is welcome – a consensus is much needed and long overdue. Research published by Labour’s shadow minister for Social Care Liz Kendall last week showed that service charges for elderly and disabled people were increasing.

Her predecessor Emily Thornberry had also shone a light on the pressures councils are under to deliver services; her survey of local authority directors of adult social services highlighting the narrow room for manoeuvre councils have in responding to increasing demand in light of cuts to council budgets, which was resulting in some tightening of eligibility thresholds.

It cannot be right that our most vulnerable citizens increasingly bear the brunt of the consequences of indecision at Westminster and Whitehall.

There are three main areas of pressures on the social care system.

First are changing demographics – the evidence on our increasing population of over-65s is well rehearsed, but these also include younger adults living longer with disabilities. Of course it is to be celebrated that in today’s society individuals are able to enjoy comparatively greater quality and longevity of life than previous generations, but we must recognise the impact this has on demand.

Secondly, funding pressures are long term and have not kept pace with rising demand over the years, but are compounded by the cuts to local authority budgets.

Councils are currently finalising budgets for the second of a four year period of real terms reductions of 28 per cent in their funding from central government. The autumn budget statement proposed that cuts to councils will continue for at least until 2017, so there is no end in sight.

The LGA has estimated an overall funding gap of £6.5bn for 2011-12 alone, and the Association of Directors of Adult Social Services has suggested that the service’s budget has already been reduced by nearly £1bn in 2011-12.

As adult social care is the largest area of controllable budget available to councils there will be unavoidable knock-on effects on the social care system’s already dwindling sustainability.

Finally, there is clearly an issue with navigation from the perspective of the user.

The consequences of unaddressed long-term demographic and funding pressures have resulted in councils being forced into short term responses to local demand, using the limited tools available to them such as assessments, means and needs tests, charges and eligibility thresholds.

Legislative tinkering around the edges with different aspects of adult social care codified in primary legislation, statutory instruments or set out in guidance adds to the complexity of the system. People have a right to know what the system will realistically offer them, how they can plan for it, and of course how much it will cost.

Perhaps largely due to this latter factor about complexity and variability, fears of unfair local variations (often described as a postcode lottery) in provision are real. The lack of transparency in the system causes uncertainty and the argument is frequently made that locally-led provision leads to a different level and quality of service depending on where one lives.

Yet as progressives, a primary driver for service delivery should be need, and a needs-led system must contain a large degree of local flexibility to be responsive.

The care needs of a seaside town with a large elderly population, for example, will vary markedly from a deprived inner city area with a comparatively larger number of younger adults with longer-term conditions. Transport needs in rural areas will vary from those of urban, and so on.

The personalisation agenda has rightly increased expectations of individuals to play an active role in decisions which affect them rather than be passive recipients of care.

Local authorities have a broad conception of what constitutes effective social care and support beyond the purely medical – beyond direct services, adult social care is also linked to initiatives on public health, leisure, housing and transport.

Individuals’ wide-ranging needs can be met far more creatively and effectively by local providers in communities who know their care requirements, than from a rigid one-size-fits-all model applied from the centre.

Clearly, it will be important to get the national-local balance right – national clarity of entitlement and assessments should be matched with local flexibility to meet needs appropriately.

Finally, a word on integration.

The NHS reforms underway are expensive and can be criticised on many levels. Yet for the purposes of social care, a major problem is their narrow conception of integration, focussing mainly on vertical integration and collaboration within the NHS, rather than horizontal across the NHS, public health and social care.

At present, the inadequacies of the social care system place an extra cost burden on hospitals and acute provision. The fact that one pound spent on social care yields an even greater saving to the NHS ought to spur reform.

Yet until services are fully integrated the mismatch between savings and costs within the wider health system will undermine investment and frustrate cost-benefit payoffs.

Both the Dilnot and Law Commissions last summer produced workable proposals, around which there was a wide degree of agreement in the sector.

There is cross-party consensus on the urgent need for reform within local government. This should set the tone for constructive national-level tri-partite discussion which must have the ultimate goals of political consensus and public buy-in. The question of how to properly fund a social care system which meets the needs of people who use it cannot be dodged any longer.

Everyone – government, opposition, councils, providers and individuals (both present and potential future care users) – must seize the opportunity to have an honest and open dialogue about reform, not least the costs associated with it – both to the individual and to the public purse. The risks of further drift are real – the costs of inaction will continue to fall on the most vulnerable in our society.

• Though cost is important, we need to focus on the quality of social care – Laura Bradley, July 5th 2011