Will Straw pitches the idea of a British Investment Bank. 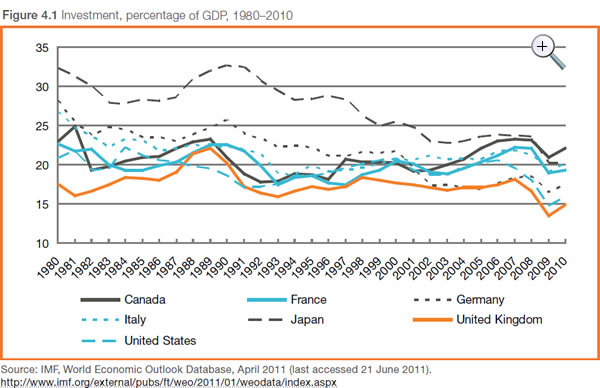 Will Straw is IPPR’s Associate Director for Globalisation and Climate Change; he will be pitching the idea of a British Investment Bank to the Fabian Society’s New Year Conference today

The UK’s low investment levels are well documented but worth repeating.

Research (pdf) by Adam Lent and David Nash for the Institute for Public Policy Research shows that for years Britain has been outperformed by Germany, the US, Japan and others, as Graph 1 below shows.

Average annual investment, expressed in terms of gross fixed capital formation, which encompasses business, government and household investment, from 1980 to 2010 was 17.5 per cent of GDP in the UK, 20.1 per cent in France, and 27.2 per cent in Japan. It is currently barely above 15 per cent.

In the UK, as part of the government’s programme of austerity, capital expenditure by government departments is projected to fall 29 per cent between 2010-11 and 2014-15. This includes cuts to school and other education building projects of 60 per cent, 34 per cent for environment, food and rural affairs, and of 17 per cent for the NHS.

Despite these low levels of investment, the cost of borrowing has rarely been cheaper. On Tuesday, for only the second time ever, the Treasury sold £700 million of government bonds that will pay returns below the level of inflation. Nominal par yields on 10-year bonds were at 2.06 per cent this week – the lowest level since they were first introduced in the 1950s.

Despite these low borrowing costs, it has rarely been harder to get credit in the private sector. The time is clearly right for a British Investment Bank set up on a strictly commercial basis and run by an independent board tasked with generating a long-term return across a diverse range of sectors.

Any investments with a rate of return greater than the current yield will generate a positive net impact for the government’s balance sheet.

Indeed, investing in marketable services like transport infrastructure, sources of renewable energy, or housing would turn the Private Finance Initiative policy on its head by allowing the public sector to borrow and then sell or lease back the service to the private sector, rather than the other way around.

This need not disrupt the government’s fiscal rules as Gerry Holtham has outlined. If Britain brought its accounting rules into line with the rest of Europe, this kind of borrowing could be treated similarly to the investments in banks like RBS and not score against the Public Sector Borrowing Requirement.

The coalition government plans to launch a Green Investment Bank, which will start investing in low-carbon energy and infrastructure projects in April 2012. But initial funds will only amount to £3 billion and are unlikely to leverage more than £15 billion over the next four years. Indeed, the Bank will only be able to borrow on the capital markets from April 2017 and that is subject to the government meeting its own debt target. In short, it will be too little too late.

Several other countries operate forms of national investment bank that Britain should look to emulate. The German KfW Bank lends to German companies that are passed onto it by private banks, but only if their investment plans are in line with the government’s priorities. The KfW is able to raise funds and make loans at a favourable rate because it is backed by the government. Importantly, although some of its board members are politicians, the management are all banking executives and they make the lending decisions.

Other examples include the Brazilian Development Bank, which has regional policy as a key remit, the Nordic Investment Bank based in Finland, the European Investment Bank and the US Small Business Administration.

Britain’s economy is crying out for greater levels of investment. Future generations will look back in astonishment if we fail to take this historic opportunity to utilise the low cost of borrowing.

• Will Osborne alter course? And how should Labour respond? – Matthew Pitt, September 15th 2011

• The government is failing to lay the foundations for long-term growth – Dr David Nash, August 22nd 2011

32 Responses to “The economy is crying out for more investment; we need a British Investment Bank”