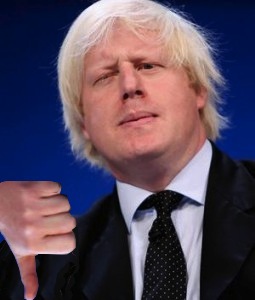 Boris Johnson follows in the footsteps of Norman Tebbit and Iain Duncan Smith by blaming those looking for work for London’s unemployment. It’s the oldest trick in the Tory book.

Last time a Tory government pushed unemployment into the millions, Tebbit said people should get on their bikes to look for work that didn’t exist. Iain Duncan Smith said they should get on a bus.

Johnson says in the Sun:

“the jobs are there and people need to have the energy to go out and get them”.

In case you missed the point, he goes on:

“There are large numbers of job vacancies. Why are young people not taking up those jobs? … Let’s talk about the work ethic”.

I’ve visited colleges. I’ve spoken to young people in my south London constituency and across the city and I know there is no problem with their “work ethic”.

What I do see and hear is a generation of young Londoners who are having their dreams and ambitions blocked by a government who sees them as surplus to requirements. There is a very real feeling that they’re being disregarded and sidelined.

Either Boris Johnson knows this but doesn’t care or he doesn’t have a clue about what is happening in the city he is supposed to govern.

There are more than seven people chasing every job vacancy in the capital. In some boroughs the ratio is just frightening. In Haringey, where last summer’s riots began, there are almost 30 people going for each vacancy. In Lewisham there are just 500 jobs for over 9,000 job-seekers.

That Boris Johnson has nothing to say about the circumstances that have led us to this dire situation is a tragedy for London.

Instead of bending over backwards to get people back to work and fighting for our young people’s future – by opposing EMA cuts or unaffordable university fees – the Tory Mayor blames them for their plight. He is blaming the victims of this government’s cruelty for the bleak future it has created.

Nothing better illustrates how out of touch the Mayor is than the way he compares an out of work graduate forced to work at Poundland for her benefits to his first job at The Times newspaper.

Johnson accuses 22-year-old Cait Reilly of “sneering” because she objected to working at the discount shop for nothing. And he implies that she is out of work, again, because she is lazy, saying:

“I couldn’t believe having left university that it really did mean getting up that early and working that long … It’s not forced labour – she’ll learn from it”.

As a new book about the Tory Mayor reveals, when he left Oxford “he had astonishing access to the drawing rooms of power and his dynastic tentacles went further than almost any young graduate of his age. Armed with these connections and many more … he was swiftly taken on by The Times”.

Unfortunately for Cait and the million other young people out of work, not everyone is lucky enough to have the Mayor’s connections or open doors. Boris Johnson and his colleagues in government are closing the doors of opportunity and blaming the young people they’re shutting out.

• Cameron is pricing the young out of education and consigning them to the dole queue– Sally Hunt, December 14th 2011