Len Duvall, leader of the Labour group on the London Assembly, explains how London Mayor Boris Johnson’s use of statistics is designed to mislead the public. 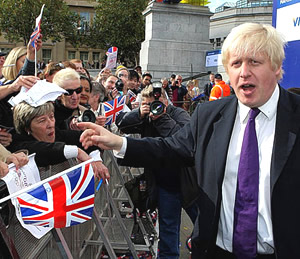 The opinion polls this week have clearly got London’s Tory Mayor spooked. Yesterday’s under-reported press release from Boris Johnson is the sign of a desperate man seeking to mislead the public about his record and smear our candidate Ken Livingstone. While we may not expect probity from the man who described the chair of the UK Statistics Authority as a ‘Labour stooge’, his relationship with the truth has clearly reached a new low.

The first dodgy claim is on police numbers.

Just in case you have any doubt on this figure, you can look on the Metropolitan Police Authority’s own website. In March 2010 there were 33,260 police officers in London, and the most recent monthly figures show the total at 31,478.

His team’s attempt to deny reality is simply staggering.

His second claim is that crime has come down more than 10% during his time as Mayor. Instead of using the traditional and well established statistical method of comparing the base year of, say, 2008, with his record in 2010/11, Boris Johnson’s team have decided to attempt to add all the recorded crimes together for 44 months of each Mayoral term.

This is misleading as it overestimates the crime levels that Boris inherited and ignores the real fall in crime that took place between 2004 and 2008.

Crime has also fallen less quickly under the current Mayor than it did in the previous mayoral term.

If we take the recorded crime figures for the last full year of each of the candidates, the picture is even starker.

In Ken’s last year as Mayor, the number of recorded crimes fell by 6.3% – more than during Boris Johnson’s entire time in office. By contrast, a comparison of Boris Johnson’s last year shows crime is only falling by 1.5% – more than four times as slowly. This also does not tell the story of the significant rises that are being seen in burglary, robbery, rape and knife crime.

The third, and perhaps most dishonest claim has been made about Ken’s record as Mayor.

Those with faint memories of the last general election might remember the criticism Chris Grayling received as shadow home secretary for using sets of crime statistics that you simply cannot compare. Boris Johnson has sought to deliberately mislead the public in the same way, comparing pre 2002 statistics with figures after the National Crime Recording Standard (NCRS) was implemented nationally.

As House of Commons Library research shows, the NCRS figures are estimated to have pushed up recorded crime levels by 10% overall, and the levels of violent crime by 20%.

The dodgy use of statistics is the desperate refuge of a campaign that is on the run. It seems Boris is becoming increasingly aware he has a poor record to defend, prompting him to inflate his own achievements and smear those of his rival. But the public are not fools, and Boris Johnson’s attempt to mislead them can only backfire.