Mann Virdee reports from Bill Gates’s speech at the LSE this week. 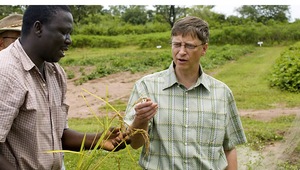 To launch his annual letter, Bill Gates gave a speech to students, international development experts, and the first global poverty ambassadors at the LSE last night.

In the speech, Mr Gates appealed to policy makers from around the world to maintain aid levels, which have been so effective in helping the world’s poorest and have improved the quality of life globally.

He praised the efforts made by the UK in tackling global poverty, saying such commitment to reach the 0.7 per cent target is ‘exemplary’.

However, he added that the only thing that stands in the way of eradicating extreme poverty is governments that falter on international aid because of financial difficulties.

Cameron and other world leaders must also ensure that donations for the Global Fund are increased in line with commitments, and this Government needs to encourage others to do so too.

Mr Gates said that the time to help build up self-sufficiency and overcome the need for aid is now, and the key to success is innovation. He cited innovations in health and agriculture, such as the near eradication of polio and development of disease resistant crops, and how they have completely transformed the lives of so many, as examples of this.

On the progress being made, Mr Gates reassured the audience and stated clearly:

“We will be successful.”

He was joined by Professor Hans Rosling, who gave a presentation on global trends and the tremendous benefits of development aid.

The speech came a day after Mr Gates addressed a meeting of the Parliamentary Labour Party, where he praised the role Tony Blair and Gordon Brown played in pushing forward the agenda on development and aid to Africa.

12 Responses to “Bill Gates: Innovation is the key to overcoming the need for aid”