Alex Hern looks at the results of Third Sector's poll of charities, and finds that they have little confidence in Cameron. 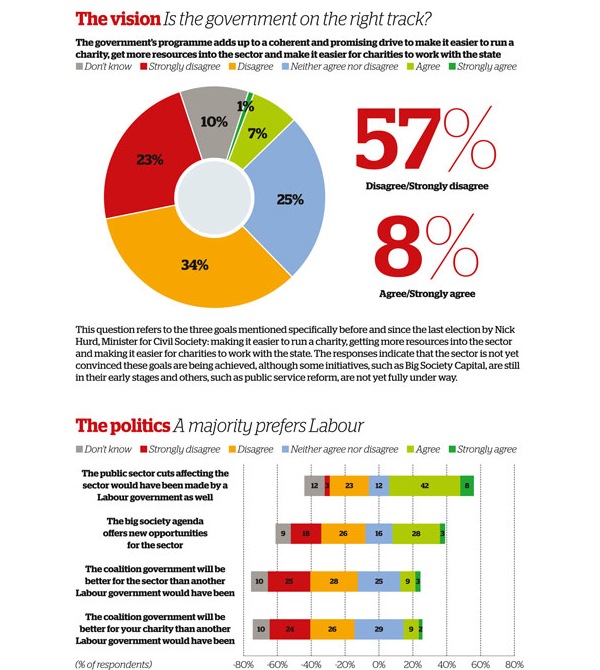 The survey reveals that:

Only 8 per cent of respondents think the government’s general proposition is “coherent and promising”, and only 12 per cent think the coalition will be better for the sector than another Labour administration would have been.

On the other hand, half of respondents think the cuts affecting the sector would have been made by a Labour government as well, and nearly a third think the big society agenda offers opportunities for the sector.

The magazine also asked charities about specific government polices on the third sector, and found that only two of fifteen named policies had significant support: Allowing gift aid claims of up to £5,000 without declarations and giving inheritance tax concessions for making ten per cent legacies.

This souring of the coalition by charities is not surprising, given the fact that, as we reported yesterday, they are suffering most at the hands of the coalitions cuts:

“The number of people employed in the voluntary sector fell by almost 9 per cent from the third quarter of 2010 and the same period in 2011, equating to a loss of 70,000 jobs, according to figures released today.

“The number of people employed in the public sector fell by 4.3 per cent during the same period, while the figure for the private sector increased by 1.5 per cent”

The full survey results can be found at Third Sector, but the conclusion is clear: Whether or not Cameron believes at all in the big society anymore, it has given up on him.

One Response to “Big Society’s verdict on Cameron: Incoherent and unpromising”