Ed Jacobs, a member of the Christian Socialist Movement, writes of the need for the West to do more to tackle the evil of Christian persecution. 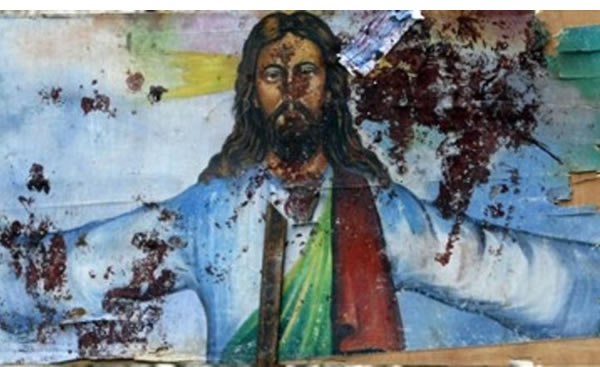 Today’s Sunday Telegraph report into Nigeria’s “descent into holy war” highlights the increasingly harrowing story of Christian persecution around the world, this heart-breaking account in particular:

That new agenda was spelt out with a brutal sense of occasion on Christmas Day, when a car bomb killed 42 worshippers at morning mass at St Theresa’s Catholic Church in Madalla, just outside Abuja.

Among the bereaved was Steady Esiri, who rushed to the scene to find a charred corpse wearing the distinctive Sunday best dress of his pregnant wife Uche, 26. Her eight-month old foetus had been torn from her womb.

“We were supposed to attend Mass together, but I was busy and planned to go the evening service instead,” he said. “Then I heard a huge explosion, and when I rushed here I recognised her dress. She was a wonderful woman, a perfect housewife, now I will have to start my life again. What kind of people do this for political ends?”

There’s something depressingly familiar to the way 2012 has started.

This time last year, the BBC World Service’s “World Have Your Say” programme posed a simple question to its listeners:

“Are we witnessing a new age of Christian persecution?”

It did so in the wake of an attack on a church in the Egyptian city of Alexandria where a New Year’s Eve service for peace fast became a scene of carnage and bloodshed as 21 worshippers were killed when a bomb went off just outside the church.

Fast forward to today and yet again, all too similarly, as worshippers were gathered to praise a God of peace, at least 40 were killed as militants from the Islamist Boko Haram organisation set off bombs outside three churches across Nigeria.

As with all attacks such as this, reaction from world leaders was swift in condemning what foreign secretary William Hague rightly asserted were:

“Cowardly attacks on families gathered in peace and prayer to celebrate a day which symbolises harmony and goodwill towards others.”

Yet as with other such attacks, a pattern begins to emerge – a round of condemnatory statements followed by, well, not very much. Where for example were the news reports on our TVs and in our papers following the Christmas Day attack that Boko Haram had given Christians in Nigeria a chilling warning to leave Nigeria in three days or face further attacks?

When we look at the world’s response, including the UK’s, we are quick to condemn attacks of violence perpetrated on Christians, but remain slow to actively do anything about it.

Take Saudi Arabia, for example. Just before Christmas it was reported that security forces had arrested 42 Ethiopian Christians gathered at a prayer gathering in the city of Jeddah.

In a panicked message to ambassadors of European missions in the Saudi capital of Riyadh, members of the Ethiopian and Eritrean Christian immigrant community living in Europe wrote:

“Security officials broke [into] the house and captured… beat and threatened them for death… They divided the men and the women and they are torturing them [in prison].”

All this in a country whose King has previously been treated to the pomp and ceremony of a state visit to the United Kingdom and in which the UK is the country’s second largest investor.

Similarly, in a contribution that can only make you wonder why the Foreign Office seems so reluctant to act, during a debate in the House of Lords on Christian persecution in the Middle East held last month, one former Conservative Cabinet minister pointed to a worrying lack of action by the government in confronting persecution in Turkey.

Speaking of a letter he had received from a group of Anglicans on the Anatolian peninsula, the former education secretary, Lord Patten, explained:

“They wrote about the issues facing them, where they find it difficult or impossible to worship in churches or church-like meeting places on that peninsula. It is not allowed by the local state rulers. I asked a series of written questions about this, starting in my characteristically fair-minded way by asking the government what the rights of Turks were in this country to worship.

“Could they worship in an unfettered and untrammelled way? Back came the helpful answer: yes, Turks can worship any which way they want in this country. I then put down some questions about whether my right honourable and honourable friends in the government would help these Anglicans by intervening with the Turkish government, to try and see whether they could get a bit more freedom.

“Then, exhausted, I gave up because I got an answer that there was nothing that Her Majesty’s Government would do – this is quite specific; you see it on the record in Hansard – to help those who minister to the considerable number of Anglican residents and holidaymakers in the Anatolian peninsula, who want to keep their heads below the religious parapet.

“Incidentally, they are residents who vote. At the moment, they are forced to rotate worship among different houses, rather like Christians in the old days. Would the government do anything to help them?

“The answer was no; they would not approach the Turkish government to ask:

‘Please can you ease up a bit? Please can they just worship in this hall and then go on quietly to worship in some other place?’”

No doubt excuses could be provided for such a lack of action – the need not to jeopardise important foreign relations or the belief the government shouldn’t, in the all too common phrase, “do God”. What matters though is not why they aren’t doing anything, but the fact governments of all political persuasions have simply been far too reluctant to act.

Whilst the US State Department has established a specific Office of International Religious Freedom, charged with monitoring and exposing cases of religious persecution across the world, why does our own Foreign Office not have something similar, as highlighted recently by Fraser Nelson in the Telegraph?

In his recent speech marking the 400th anniversary of the King James Bible, David Cameron spoke of the UK as a “Christian country” and said:

If the prime minister is able to stand up and declare his belief that the values and morals which Britain has enshrined within its society as a result of Biblical teaching should be stood up for and defended, then 2012 should be the year those very same values are defended across the world. Countries such as the UK need to start prioritising the defence of the rights of Christians to believe and practice their faith free from intimidation or attack both in word and more crucially in deed.

And at its heart, there should be a reassurance that for those countries that look at the Christian faith with suspicion, those who follow Christ do so not in an attempt to overthrow governments but to follow the One who preached and practiced forgiveness, love and hope. Is not the forgiveness the Lord showed in sending His son so that we need not perish at His anger not the kind of forgiveness we could do with more of today?

When Jesus told us in the Gospel of Matthew to “Love your enemies and pray for those who persecute you”, is this Love – the Love that is extended even to those who mean us harm – not the kind of Love we should be standing up for and protecting with every fibre of our bodies across a world plagued with violence, fear and intimidation?

And when we are told in Revelations that God “will wipe every tear from their eyes. There will be no more death or mourning or crying or pain, for the old order of things has passed away”, is it not unjust to stand passively by and allow gtovernments across the world to prevent Christians from practising and celebrating the hope this gives them in a world now where the tears, the death and the pain that comes from war, famine and economic hardship are all around?

As we look ahead to 2012, let us make this is the year we in the West take a stand once and for all, in our actions as well as our words, for the right of Christians worldwide to practice and pursue the hope that comes from their faith without fear of intimidation and death.

• Shahbaz Bhatti assassination: Who will stand up to the extremists now? – Shamik Das, March 2nd 2011

• Beware of pushing Catholics out of the progressive club – Kevin Meagher, September 18th 2010