James T. Plunkett looks at why increased participation in the workforce by women may be the key to growth that this government needs. 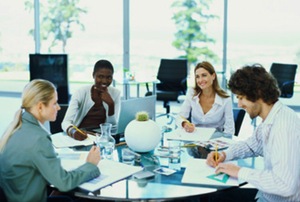 As economic forecasts continue to head south, it’s worth pausing to ask a simple question:

Where exactly do we expect future growth in living standards to come from – even once a recovery takes hold?

The list of possible answers to that question isn’t long.  In fact, when it comes to household income growth, there are effectively four:

• Pay could grow faster than inflation

• We could all work longer hours

• More of us could work; or

• The state could get more generous

One implication of taking a hard-headed approach to living standards is that it helps us hold politicians’ feet to the flames when they say they have a strategy for easing the squeeze.

Anyone who talks of a general intention to ‘rebalance the economy’ needs to explain which of the four drivers of household income their strategy will operate through. Will it boost pay, working hours, employment or households’ tax-benefit position?

The good news on this front is that two reports this week point to one such opportunity: growth in women’s employment.

The first report, our own from the Resolution Foundation, shows quite how much headroom we still have to raise female employment in Britain.

In 2010, the UK ranked just 15th in the OECD on female employment, just behind Slovenia. If you compare the UK’s performance to better performing countries, around a million women are missing from the UK workplace.

As the below chart from the report shows, two groups of women in particular help to explain our poor performance: those in their 30s, who are far more likely to have young children, and those in their early 60s, past the (now abolished) Default Retirement Age. 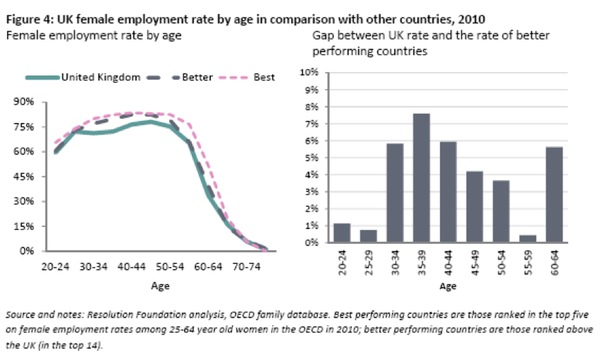 The second report, from the IPPR, identifies one way of helping to close the first of these gaps. It calculates that the cost of providing free universal childcare in the UK would be £6.7 billion, and finds that this price tag could be met by restricting tax relief on pension contributions to the basic rate.

The report makes a powerful case for the economic benefits that would flow from higher female employment.

As Nick Pearce of the IPPR says:

“At a time of severe fiscal constraint, it is vital for Britain to focus resources where they will make the most difference – in helping families with the cost of living and strengthening the public finances over the long term.”

So far so promising. So what’s the bad news? It’s that we’re in danger of passing this opportunity up. In the case of the coalition, both reports remind us once again of the shortfalls of a deficit strategy that isn’t informed by a serious strategy on living standards.

Back in June 2010, funding for childcare was one of the first areas the government looked to for cuts, dramatically worsening the employment prospects of millions of low income women, hitting their living standards over the short- and the long-term.

And for Labour too, the UK’s performance on female employment raises some difficult questions.

Their years in power saw a dramatic expansion of publically funded childcare but also a much more significant increase in spend on tax credits, including billions spent on families with older children. Was that balance right or could more have been done to build institutions such as universal childcare, supporting more women into work?

For the foreseeable future, investments in such services will mean making difficult choices about where else to cut.