Many have been outraged by BBC attitudes towards women from sports personality to nominating a panda as a female face of 2011 but Hollywood does little better. 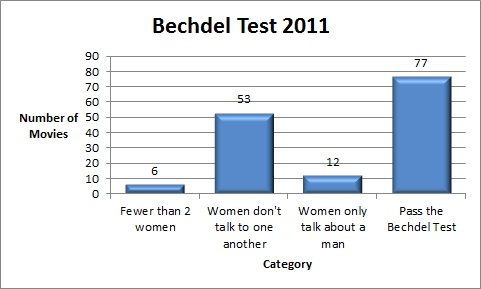 For an organisation often seen as the prime home of political correctness, the BBC has not covered itself in glory in the final months of 2011 when it comes to women’s representation.

First we had the bizarre spectacle of a 10-person shortlist for sports personality of the year that did not feature a woman – apparently winning gold at the world rowing championiships  or the European gymnastics championship is not enough.

Now we have the decidedly odd decision to nominate a panda as one of the women faces of the year.

Away from the BBC, a time-honoured way of measuring whether the film industry has noticed that 51 per cent of the population are women is the Bechdel Test.

A film passes the Bechdel Test if, at some point, two names female characters speak to each other on a subject other than a man. It is a very low bar.

If one woman appears in the first scene and says: ‘What’s the time, Alice?’  and another replies ‘It’s 3 o clock Zelda’, never to be seen again, the movie has passed the Bechdel Test.

In percentage terms, only 52 per cent of films passed the Bechdel Test – which conforms to the longrun average. 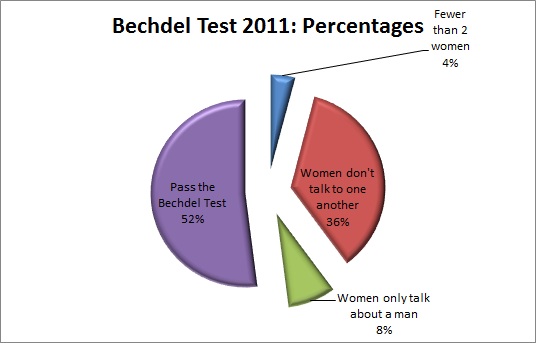 Passing the Bechdel Test is no assurance of quality. While at no point during critically-acclaimed “The Artist” do two women talk to one another, Alvin and the Chipmunks: Chipwrecked passes with flying colours.

This deeply ingrained problem makes the achievement of women in Hollywood with a claim to the title of the best actor of their generation – such as Meryl Streep – even more remarkable.

• And the BBC’s Sports Personality of the Year could have been… – Shamik Das, December 22nd 2011

• The lack of women in Westminster has gone on for too long – Nan Sloane, October 25th 2011

14 Responses to “Women’s representation in movies: Not half good enough”