Alex Hern reports on sleazebag lobbyists Bell Pottinger’s vandalism of Wikipedia, and Jimmy Wales’s personal appeal to them to stop it. 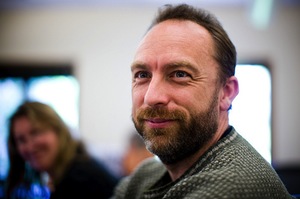 Wikipedia founder Jimmy Wales – he of the banner asking for donations – has spoken out against sleazy Tory lobbying firm Bell Pottinger, after they were accused of using so-called ‘sockpuppet’ accounts to edit the online encyclopaedia to be more favourable to their clients.

Speaking to the Independent, Jimmy said:

“I am astonished at the ethical blindness of Bell Pottinger’s reaction. That their strongest true response is they didn’t break the law tells a lot about their view of the world, I’m afraid.

“The company committed the cardinal sin of a PR and lobbying company of having their own bad behaviour bring bad headlines to their clients, [and] did so in a fashion that brought no corresponding benefits.

“There are ethical PR companies out there.”

The full list of edits made by the account “Biggleswiki”, which Bell Pottinger have admitted “is one of a number of accounts that the digital team have used to edit Wikipedia articles”, is a revealing history of the sort of work they do.

As Political Scrapbook noted, one of the edits made by Bell Pottinger was on the article about Clare Rewcastle Brown, Gordon Brown’s sister-in-law. Brown is a Malaysian investigative journalist, so when the Malaysian government paid Bell Pottinger to clean up its image, one of their aims was to discredit her.

Material was added which was sourced to a newspaper owned by a governing political party in Malaysia:

On 25 February 2011, the Malaysian Deputy Information Communication and Culture Minister Datuk Joseph Salang announced that Radio Free Sarawak [founded by Rewcastle Brown] was not licensed by the Malaysian Communications and Multimedia Commission, and was therefore operating illegally.

At the same time, RFS was accused of inciting racial hatred in Sarawak through its daily broadcasts.

More typical of Biggleswiki’s edits is that made to the cash for honours page. Under the pretence of making minor edits – in this case, adding some references and links to the peace – Biggleswiki very quietly deleted one name from a list of people who’d loans of over £50,000 to the Conservative party.

Quite why Henry Angest, the Chairman and Chief Executive of the Arbuthnot Banking Group PLC, doesn’t want it to be public knowledge that in 2006 he had £550,000 of outstanding loans to the Conservative Party is unclear, but he appears to be just one of hundreds of clients who have paid the lobbying firm to vandalise the website.

We do not yet know the identity of all of Bell Pottinger’s sockpuppets, but this should serve as a warning to anyone who relies on the encyclopaedia too much – as a website which relies on altruism, it will always remain vulnerable to the selfishness others.

• Bell Pottinger is sleazy, but lobbying can be so much more – Jonny Mulligan, December 7th 2011