Tuesday was an awful day for the government, but the prediction is for 2011-12 borrowing to still be lower than 2010-11, writes Cormac Hollingsworth. 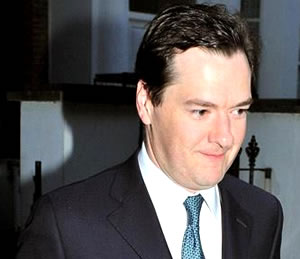 Tuesday was an awful day for the government, but the prediction is for 2011-12 borrowing to still be lower than 2010-11, writes Cormac Hollingsworth

Awful as the autumn statement was, George Osborne could still say that the government were holding to their coalition agreement to reduce the deficit – but to paraphrase Han Solo, “bad against a forecast is one thing, bad against reality, that’s something else”.

When we updated our forecast for 2011-12 borrowing we discovered there is a reasonable scenario that borrowing won’t fall for 2011-12.

We’ll present our updated forecasts below, but failing to cut this year’s borrowing will have important consequences for the coalition.

Osborne’s credibility is already under question for the fallout from his failed gamble. However, if borrowing fails to fall, the question is no longer one of the competence of one chancellor, and becomes an existential threat to the coalition, for two reasons.

First, because the coalition is there to cut the deficit: if it has failed to reduce the deficit in its first full financial year, then people will ask what confidence do we have that high borrowing won’t persist.

For borrowing to fail to fall, it will require a recession in Q4 and Q1 next year. If this does happen the government has already settled on their fall-guy: Europe. But this exposes the second and greater threat to the coalition.

With UKIP one point below the LibDems in the polls, and the 81 Group of Eurosceptic MPs still finding their voice, Europe is the thing this coalition most needs to not talk about.

The danger of a deficit that fails to fall doesn’t just come from the damage to economic confidence, but how it poses existential questions to the coalition, the Liberal Democrats and the Conservatives all at the same time.

It’s how these all combine that will make borrowing of 9.3% of GDP such an important number in March 2011.

In July this year we predicted that at some stage this year the government would have to concede because their gamble had failed. Very simply their gamble was that while they needed to scare business and consumer confidence in Q3 2010 to push through unfair cuts in the comprehensive spending review, they hoped both would recover, and with them growth.

Without growth, it’s very hard to cut a deficit. Unfortunately the gamble failed, growth has collapsed, and two weeks ago we reported on the City’s expectations that borrowing would be above Alistair Darling’s growth budget.

The model we used in July to make these predictions used the OBR’s predictions for growth and borrowing. To make the new predictions, we’ll add the new data point from yesterday’s OBR report (pdf).

The data points of predictions for quarterly growth for the fiscal year 2011-12 and also the predicted borrowing for the full year as a percentage of GDP.

As we warned in July, borrowing could be higher than Darling’s budget if growth slowed, and that is indeed the current prediction – Darling’s number was 8.3% of GDP for 2011-12, and the OBR is now predicting borrowing of 8.4%.  However, the game’s not up. The year hasn’t finished, and the outlook is not good.

Or to put it another way, from now until the end of the fiscal year, borrowing needs to be the same as last year for the next five months.

The OBR themselves commented on the PSNB figures in October:

Central government expenditure has grown less strongly than we expected so far this year, but some of this reflects different timing of payments, and these effects may unwind over the rest of the year, which is a period when departments usually increase their spending.

The outlook for government receipts over the rest of the year is very dependent on developments in the wider economy.

Given the largest month for receipts is still ahead of us in January, we need to look carefully at the predictions for growth for the next two quarters, and ask how a recession in Q4 and Q1 interact with the final borrowing for 2011-12. To make those predictions, we chart below the OBR’s matrix of growth and borrowing that it has predicted from the table above.

We put two scenarios on the graph, the OECD’s recent prediction, and the recession required to put borrowing at 9.3% of GDP. The OBR’s prediction of just one quarter’s negative growth in Q4 was described by the FT as “Panglossian” yesterday morning.

The OECD has forecast slightly negative growth for both Q4 and Q1, a technical recession, but still one that will push borrowing higher. Under the OECD’s scenario, borrowing will be 8.6% of GDP. But what is the scenario where there is no change in borrowing between 2010-11 and 2011-12? 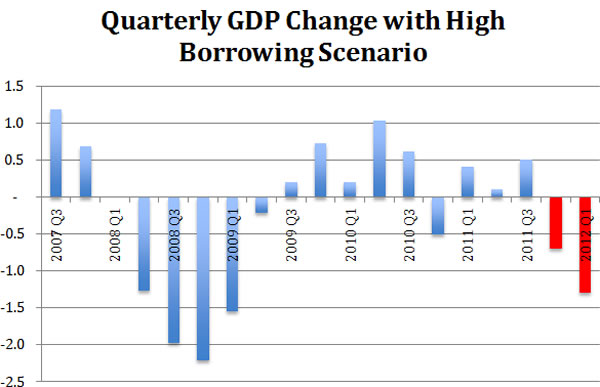 We’ve already warned about the new banking crisis that is raging in the markets. The Bank of England said this month that risks in financial markets are as high as when Lehman collapsed. It’s the banking crisis that will again undermine growth for the next two quarters, enough to push borrowing to last year’s levels.

Of course, the government isn’t blaming the banks, they’re blaming Europe. It would be better for the government if they decided the banks needed a further recapitalisation, and raised the banks as the cause of the new recession. That at least would avoid talking about Europe.

However, the government will feel its credit easing policies have solved the banking issue, and they can continue to blame Europe, which will play out very badly.

The government will announce borrowing for 2011-12 in the March budget. If the recession does come, it is quite likely it will be announcing the failure to cut borrowing with their junior partner in fourth place in the polls.

Their election promise was to cut the deficit, but the leadership needs time to quieten down the 81 Group of Eurosceptic MPs. But the 81 Group could interpret the rise of UKIP is some generational change in views and are emboldened.

Europe has less consequence for the Labour party, although it shouldn’t be long before the pro-Europeans in the Labour party realise that in Europe finding a solution to the eurozone’s problems they need to solve Gordon Brown’s key tests of sustainability:

“Are business cycles and economic structures compatible so that we and others could live comfortably with euro interest rates on a permanent basis?

“If problems emerge is there sufficient flexibility to deal with them?”

So, if Europe finds a solution, the path would then have been cleared for Britain to join.

But Labour can’t ignore the rise of UKIP driven by the coalition’s economic failure. Anthony Painter is one of very few to have explored in quite detail how questions of how Labour needs to be engaging with questions about national identity if it is faced with the rise of parties such as UKIP.

To illustrate the richness of possibilities this poses, let me just end with a question. If Osborne stands in March 2012 and says the government has failed to cut the deficit in its first full year, Labour will be at its gotcha! moment of this decade. What would happen if it were Ed Milliband who rose to answer George Osborne, and offered terms for Labour to join a national government?