Val Shawcross argues that Boris is wasting millions of public money on an unnecessary and expensive fleet of prestige buses. 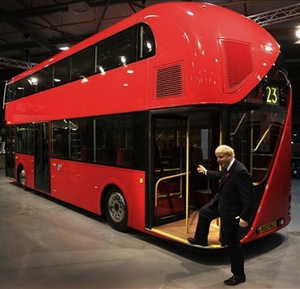 Is there a policy that sums up the priorities of Boris Johnson’s mayoralty better than the new ‘Routemaster’?

We’re on the verge of another recession. The cost of living is becoming unbearable for many in London – passenger watchdogs have warned that public transport is becoming “unaffordable” for those on lower incomes because of Boris Johnson’s fare rises. And the Tory mayor is spending millions unnecessarily redesigning our city’s buses.

The so-called new generation Routemasters, costing over £1.3 million each – five times the cost of a green, hybrid double decker – will run on just one of London’s 700 routes. So when, from January, Londoners from Barnet to Bexley and Hillingdon to Haringey will be paying a massive 50 per cent extra for their bus tickets, they should remember where a large chunk of their fares are going.

If it’s a choice between improving their bus service, keeping their fares down or spending millions to alter the design of the double-decker they ride to and from work, what would the cleaner, school teacher, office or shop worker choose?

We don’t oppose the new bus for opposition’s sake. The bus is green and well-designed. But it’s costing millions when budgets are tight and looks strangely like the other green, hybrid double-deckers on London’s roads, which were only rolled out a few years ago.

The notable new addition is the open platform, which requires extra staff to supervise. But according to the mayor’s own figures it would cost an extra £54 million a year to employ conductors on just ten per cent of London’s bus network. To put this in context – the mayor’s latest bus fare hike will bring in £57 million.

He refused to say what this ridiculous policy would cost before the 2008 election, later admitting it would cost £100 million. This has to be the most expensive photo opportunity in history. Millions spent for pictures of the Tory mayor on an open-backed bus in the run up to the May election – paid for by squeezed fare payers.

Londoners have a choice in May: above inflation fare rises year after year under Boris Johnson to pay for vanity schemes like needlessly redesigned buses, or lower fares and a fairer deal under Ken.

32 Responses to “What costs £1.3 million a pop and Boris hopes will get him reelected?”