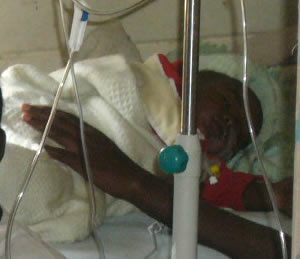 David Taylor is the chair of the Labour Campaign for International Development (LCID, @LabourCID)

Whilst the Conservatives’ misguided austerity drive is hurting hard working families up and down the country, this government has at least claimed that they would not be balancing the books on the back of the world’s poorest people.

Indeed, only on Monday did secretary of state Andrew Mitchell say in an interview with the Financial Times that;

“The prime minister, the chancellor and I have made it absolutely clear that we stand by this commitment and that we won’t balance the books on the backs of the poorest people in the world.”

LCID have already detailed in length how this government is failing to show the necessary ambition, vision and leadership on international development – most notably on their opposition to a Robin Hood Tax at either a global or an EU level – at the recent G20 Summit in Cannes there was categorical evidence they were lobbying hard against a global agreement being reached.

The key line of the defence of the Conservatives to this charge was that they were ring-fencing the aid budget – something we have praised. But on Tuesday even this was undermined.

For in the autumn statement not only did Osborne reaffirm his opposition to a Robin Hood Tax, not only did relax measures meant to tackle climate change – he actually cut the aid budget by nearly £1.2 billion.

“the spending plans of the Department for International Development meant that the UK was on course to exceed 0.7 per cent of national income in 2013.

That I don’t think can be justified and so we are adjusting those plans so we don’t overshoot the target.”

Osborne is being incredibly disingenuous here. Let’s be clear – firstly, ‘adjusting’ DFID’s plans means a cut of £1.17bn to the amount they committed to spend in the 2010 spending review, as the box below illustrates;

Secondly, DFID was not due to ‘overspend’ when the department’s spending plans were first set in 2010. The only reason they are now is because GNI projections are now in 2011 lower than they should have been – and that is because Osborne’s ruinous economic policies have flat-lined the economy.

And even if we were to admonish this government of blame for our perilous economic position, this government should have had the courage to resist wielding the axe – UK aid never reduced under Labour, even during the height of the recession.

When Alasdair Darling delivered his 2009 budget, the global recession had reduced the UK’s GNI – yet the then Labour government still kept to the higher figures we promised in the 2007 comprehensive spending review. And not only that, we actually spent more in 2009-10 than we committed to in the 2007 CSR; £1.8 billion more over the two years.

The historic 0.7 per cent target was never meant to be a maximum limit. It was meant to be a minimum amount representing our minimum commitment to the world.

Relative to the UK’s total government expenditure of £170 billion, the amount cut is not a large amount – and it won’t make a dent on the deficit.

But the impact on some of the world’s poorest people could have been massive. The amount cut represents;

• Enough to vaccinate 5.3 billion people against polio (it costs £2.22 to pay for 10 vaccinations)

The key questions that must now be asked are the following;

1. Where will money be cut from? On which DFID or multilateral programmes will not be either cut or left unrealised?

2. When will they bring forward the legislation they promised and enshrine in law the requirement to meet the 0.7% target from 2013? Labour drafted legislation that was ready go, so why the continued delay and equivocation over the date for tabling it in Parliament?

3. If the UK economy improves, will Osborne restore the amount he cut?

This government claim not to be balancing the books on the back of the world’s poorest people has been severely undermined. This £1.2 billion cut is a clever move by Osborne to appease the Tory right – who have been relentless in their opposition to UK aid – whilst remaining within the technicalities of their promises.

But as a result of their cut thousands of people who could have been helped by Britain – been immunised, gone to school or received treatment from HIV and AIDS – may now pay the price of this government’s failing economic policies.

• Britain should be proud of the progress made in battling pneumonia – Ivan Lewis MP, November 14th 2011