Shamik Das looks at the “New Right”, aka BNP lite. 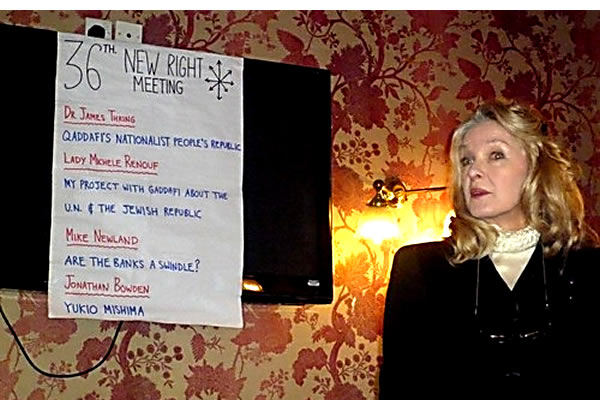 A collection of ex-BNP, ex-NF anti-Semites, Gadaffiites and conspiracy nuts, the “New Right” have been described as a “pan-European nationalist, conservative revolutionary think tank and school of thought” – yet think tank is probably the last word that springs to mind when you delve into them.

Hope Not Hate’s account of a recent NR meeting is a must read:

For those who can no longer fit themselves or their egos into groups like the BNP and feel themselves far too up market for the rest of the basement dwellers on the British “scene”, there is always the “New Right”…

Yesterday they came together for their “36th meeting”. That’s not “annual” either, it’s just when the time suits and a pub can be booked for a secretive soiree. Most of those present were ex-friends and colleagues of Griffin, one of them even a former BNP treasurer!

Dr James Thring opened the proceedings with a rather warm and glowing remembrance of Colonel Gaddafi, that charming old chap who apparently “wanted everyone to be heard in Parliament”.

Plus the first in the long list of denials through the afternoon was on the case of WPC Yvonne Fletcher. Although it appears the new Libyan government are considering helping bring her killer to justice, “The Libyan Embassy was not tall enough for someone shooting from any window there” to shoot her he told the room. Perhaps he should tell the Libyans that, not a room of Holocaust deniers?

Lady Michelle Renouf, [(pictured above)], an Australian felt to be rather aloof, also made an appearance. When she’s not fronting up for “Press TV” of Iran, she’s working with Holocaust deniers and of course, she had some connections with the late Colonel Gaddafi. “We need more witty, brilliant, authentic men like Gaddafi” Michelle told the meeting, also going onto describe Gaddafi as a “fantastic role model”…

Most observers will be happy to see Jonathan Bowden up and about again. Bowden was hounded out of the BNP a few years by some rather unflattering allegations. The self-styled artist, playwright and former “Revolutionary Conservative” complained that the Japanese had been “feminised” by defeat in the Second World War and that since then had been “mentally and morally invaded by the US”.

It was a cracking day for everyone that was there. Jews were baited and Jews hated, Gaddafi mourned and admired, and the Holocaust was scoffed at.

Former model and actress, Australian born Renouf is a staunch defender of a number of well known Holocaust deniers including David Irving, Robert Faurisson, Richard Williamson, Germar Rudolf, Ernst Zündel and countryman Fredrick Töben. Efraim Zuroff, of the Simon Wiesenthal Centre in Jerusalem told “The Australian” newspaper: “This woman is especially dangerous… she can put a pretty face on a very ugly movement.”

Renouf has previously described Judaism as a “repugnant and hate-filled religion”. She attended a “Holocaust denial” conference hosted by Iranian President Mahmoud Ahmadinejad entitled “Holocaust Review: A Global Vision” in Tehran in December 2006. Others at the conference included former KKK leader David Duke.

They may dress themselves up as intellectuals, but be in no doubt, this rabble of racist thugs, Holocaust deniers and Hitler lovers are just Nazis in smart suits.

26 Responses to “The “New Right”: Gaddafi lovers, Holocaust deniers and ‘up market’ fascists”