Kevin Meagher argues that increased spending on military-style equipment for the police is the last thing that the riots should lead to. 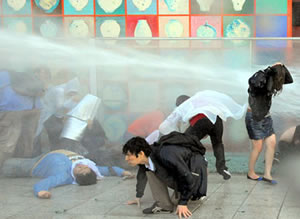 Metropolitan Police chiefs are considering spending £4 million on three new water cannons as well as increasing the number of officers trained to fire plastic bullets, according to a leaked review of police tactics following this summer’s riots.

This follows hot on the heels of last week’s leaked report by the Police Federation which argued that a lack of useful on-the-ground intelligence hampered the task of identifying community leaders who could have helped intervene with the rioters.

There were also basic logistical and telecommunication failures which saw frontline officers resort to using their personal mobile phones in order to co-ordinate with their colleagues.

This is where any inquest into the policing failures of this summer’s disturbances should start – with the practical measures that will make a difference if there is any repeat occurrence – rather than buying expensive, unproven and ethically-dubious paramilitary-style equipment.

As Left Foot Forward has previously argued, water cannons are ill-suited to the kind of civil disorder we witnessed during August’s riots as they rely on there being large static crowds to disperse (as there often are with Northern Ireland’s parades disputes) rather than the small, mobile groups we saw.

Despite the Prime Minister boasting at the time that water cannons could be deployed “within 24 hours”, we revealed that there are presently only six water cannons in the whole of the UK (all in Northern Ireland) and they require specialist training before deployment.

Moreover, home secretary Theresa May has been strongly opposed to the use of water cannons in the past, telling the House of Commons last December :

“I do not think that anyone wants to see water cannon used on the streets of Britain… we have a different attitude to the culture of policing here in the UK. We police by consent, and that depends on trust between the police and the public.

“A range of measures is available to the police, and I do not think that water cannon is needed.“

One year on and the police are taking it upon themselves to supersede the home secretary’s sensible advice; with a creeping militarisation of our policing that undermines our basic civil rights as well as damaging Britain’s reputation around the world.

Water cannons and baton rounds are more commonly regarded as tools of the trade for repressive regimes looking to quell popular uprisings. Indeed earlier this week, students in the Philippines marching in support of the Occupy Wall Street movement were beaten back by water cannons after they tried to march to the presidential palace.

In the British context it is hard not to see the Met’s move as an over-reaction ahead of next summer’s Olympic Games. There may well be pressure on new Commissioner, Bernard Hogan-Howe, to crack down in order to avoid a repeat of the scenes we saw in London and other major cities, but this should not come at any cost.

As we have seen with the deployment of tasers, once the police are issued with offensive weapons they will be used – and invariably misused. A Channel Four investigation earlier this month showed a sharp rise in police forces using tasers – ‘stun guns’ discharging a 50,000 volt charge – with the average force increasing  their use of tasers year-on-year between March 2010 and March 2011 by an alarming 130 per cent.

Amnesty International has voiced concern about their growing use following separate incidents in August where two men died after being tasered by police officers.

Meanwhile baton rounds – the euphemism for rubber and plastic bullets – have long been used in Northern Ireland against protestors, with often fatal consequences.

The University of Ulster calculates that 14 people under the age of 22 were killed by baton rounds during the height of the troubles between 1969 and 1991. Nine of the dead were under 16. The comparison is apt given much of this summer’s rioting was carried out by young people and school-age children.

The question then follows: are we really going to sleepwalk into a position where we see potentially lethal weapons routinely used against school-age children, or student protestors? Or watch as the St. Paul’s Cathedral demonstrators are water-blasted off the streets?

The police have a difficult job in countering highly mobile rioters and mass protestors, but meeting their onerous responsibilities by ‘tooling up’ is not the answer.

Policing ‘by consent’ must be preserved and this creeping militarisation must be resisted.

• Water cannons are “useless”, require specialised training and we only have six – Kevin Meagher, August 12th 2011

• Our summer of strife is a degenerated, cracked-mirror image of the Arab Spring – Kevin Meagher, August 10th 2011

• The security, symbolism and history of the Queen’s visit to Ireland – Patrick Bury, May 17th 2011