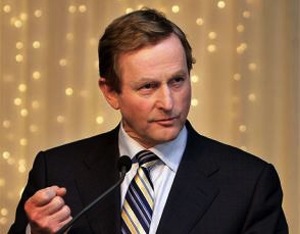 As George Osborne was this week forced to admit within his autumn statement that prospects for growth are bleak to say the least, in Ireland, the Taoiseach Enda Kenny has told the Irish Parliament, the Dáil, that the government in Dublin is sticking to its growth forecast for next year of 1.6 per cent.

Kenny was forced to make the statement as the Irish Economic and Social Research Institute forecast that whilst growth this year would be 2.2 per cent, next year it would fall to 0.9 per cent, a dramatic cut to its previous predictions that economic growth across Ireland would be an optimistic 2.3 per cent in 2012.

In a grim outlook for the euro-area, the Institute explained:

“The financial crisis currently gripping the eurozone, coupled with tightening fiscal policy across the region, are likely to send the eurozone back into recession. As one of the world’s largest and most financially integrated economies, this will have adverse implications for the global economy.

“Against such headwinds, Ireland’s road to recovery will become much more difficult, dependent as it is on export-led growth. In the near-future we should be able to continue to meet our fiscal targets, but it will become harder to do so as the external environment becomes increasingly unfavourable.

Figures released yesterday by the Irish Central Statistics Office further highlighted that unemployment had increased by 0.1 per cent to 14.5 per cent in November, just days before the government is due publish its budget for 2012. In pledging to stick by the government’s previous forecasts of 1.6 per cent growth next year, Kenny said that it had:

“set its face in respect of producing our budget for 5th and 6th December and we are not changing the target we have set now”.

Meanwhile, as EU Leaders prepare to meet again next week at the end of year European Council meeting, the Taioseach has once again piled the pressure on Germany to accept that the European Central Bank now needed to provide the solution to the on-going Euro crisis which threatens to engulf the world economy.

During a feisty leaders questions in the Dáil yesterday, in which the opposition Fianna Fáil leader, Micheál Martin accused the government in Dublin of “standing idly by while Rome burns”, Enda Kenny, speaking of the “crisis in the Eurozone” said ahead of next week’s European Council meeting:

“A decision of the last meeting was that the EFSF should have two vehicles available to it to ratchet up funding to provide this credible backstop and firewall of more than €1 trillion. That lost the confidence of the markets. Has anybody out there the answer to this problem and question which now needs to be addressed?

“I have set out on many occasions that the ECB is the port of call of infinite firewall capability to prevent all that contagion. Some countries oppose that for strong reasons. In my view, the answer to this problem has to lie with the support of the ECB in whatever form, be it through the EFSF, IMF or some facility in that regard but it has got to be dealt with quickly.

“We had the discussion about the position on treaty change. Even if all the countries were to agree, which they would not, of course, one cannot deal with this crisis by that method before Christmas.

“It has got to be dealt with politically and quickly.

“We have been clear about this and I am glad the Deputy shares my view in respect of the requirement of support for the ECB, because this is a concern for business in respect of investment into the eurozone and into Ireland and, clearly, for a country that exports so much from our shores, if other countries are having trouble with banks and restructuring and their economies are in decline, this issue has to be addressed forcefully.”

His remarks came as the Euro Group of Finance Ministers this week approved a further round of €8.5 billion bailout money, to which the UK also contributes, for Ireland from January, commending Dublin for:

• The security, symbolism and history of the Queen’s visit to Ireland – Patrick Bury, May 17th 2011