Should the Northern Ireland Football team should sing “God Save the Queen” before their matches? Ed Jacobs investigates. 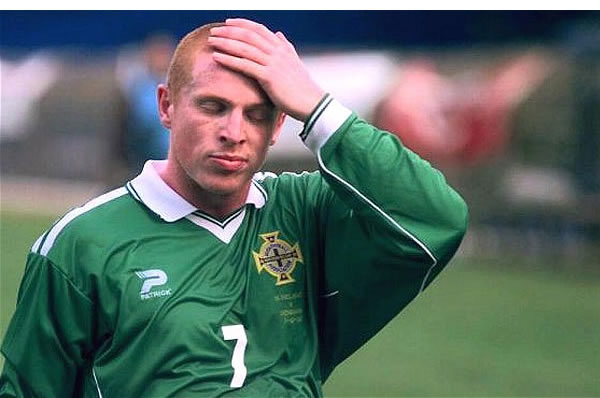 The Belfast Telegraph has today published a series of articles focusing on one of the more contentious issues in Northern Ireland sport, namely whether or not the Northern Ireland Football team should sing “God Save the Queen” before their matches.

The debate comes just weeks after the former Northern Ireland player Paul McVeigh called for the anthem to be dropped as it served, he argued, only to alienate Catholic players who as a result preferred the lure of playing for the Republic of Ireland.

In calling on the Irish Football Association (IFA) to do more to retain the best players in the north, McVeigh last month declared:

“The IFA has to make decisions if it wants to stop players from the north opting to play for the Republic and the answers are staring them in the face.

“Who are the people who make decisions at IFA level and can they really say that it is a good thing for football in Northern Ireland to have the English anthem played before games?

“Northern Ireland, as long as it continues with that anthem, will not have an identity of its own and players will continue to turn to the Republic.

“I don’t care if the next manager of Northern Ireland is Fabio Capello; whoever gets the job starts it with his hands tied behind his back because he will not have many of the best players from the country to choose from.”

Following first minister Peter Robinson’s calls at his party’s annual conference a few weeks ago for an end to the sectarian divides that have long dogged Northern Irish society, the Belfast Telegraph’s reports expose not just how contagious the issue is but the impact playing then anthem has on wider society.

For Ed Curran, a columnist at the Belfast Telegraph, the continued playing of “God Save the Queen” sits badly with Robinson’s call’s for unity.

Outlining his calls for a new anthem he concludes:

“There is no more emotional moment in sport on this island than when God Save The Queen is played at Windsor Park and A Soldier’s Song at the Aviva Stadium in Dublin. And yet, in the context of 2011, I now feel they are both wrong.

“If Scotland and Wales can do it with Flower of Scotland and Land of My Fathers, so can Northern Ireland. Given our divisions, we have even more reason to find words to unite and inspire all – and not just some – of our talented international sportsmen and women.

“The singing of an anthem should come from the heart. It is about passion, spirit, commitment, loyalty and pride in one’s country. It should never invoke unease among some spectators, or – more importantly – among the players on the pitch.

“Yet that is precisely what happens in Dublin and in Belfast. The tight lips of international players standing uncomfortably to attention before games in both cities is a telling reminder of our divisions, if one were needed.”

For former Northern Ireland World Cup striker and IFA ambassador Gerry Armstrong, however, changing the song that is sung before football matches is simply tinkering about with the much larger sectarian problem.

“So should Northern Ireland drop the national anthem? After I researched the views of the up-and-coming generation of footballers, I found the results were hardly surprising.

“Predictably, there’s one view that thinks the move could bring a few more Catholics back to international matches at Windsor Park. But on the other hand it has become clear there would be a significant number of dissenters among the fans who have supported us through thick and thin.

“The research I’ve done points to a conclusion I had foreseen all along – there is no point, no benefit, when it comes to bridging the yawning gap in society here.”

The debate takes place as Sinn Fein culture minister, Caral Ni Chuilin, enraged unionists by declaring during yesterday’s Question Time that her department had had no discussions with Buckingham Palace about ways in which Northern Ireland could celebrate the Queen’s Diamond Jubilee next year.

In a strongly worded attack, Jim Allister, leader of the hard-line unionist party the TUV responded:

“Cullen’s response was an insult to the majority of people in Northern Ireland who hold the monarchy in very high regard. Her bigoted answer today again demonstrates her unfitness for office and exposes all of Sinn Fein/IRA’s fine words about wanting to see a shared future for what they are.”

20 Responses to “Should Northern Ireland football scrap God Save the Queen?”