The jobs market risks heading back to levels of unemployment unseen since the last time the Conservatives were in government, writes Richard Exell. 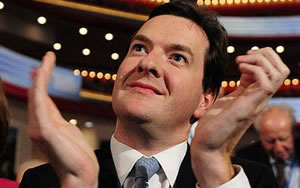 The latest economic news prompts the question: if we’re heading back towards a recession, is unemployment going to be like it was under Gordon Brown or are we going to replay Margaret Thatcher’s recession?

Every month Markit produces a Report on Jobs for KPMG and the Recruitment & Employment Confederation (the trade body for employment agencies), based on the experience of the REC’s members.

The latest report (pdf) is described as “grim reading” by KPMG, and REC says the jobs market:

“…has been slowing since May but this slowdown has accelerated in the autumn. This is being driven by the double whammy of falling business and consumer confidence.”

Permanent placements by agencies fell for the second month running in November, and the rate of decline was the steepest since July 2009. Temporary placements continued a 28-month rise, but the pace of growth was “only slight”.

The report adds to the suggestions we may be headed back to recession.

Last month, after the official employment and unemployment statistics were published, we said that as far as the labour market is concerned, this country might as well be back in recession, and Graph 1, published by KPMG/REC, has a very ominous look to it 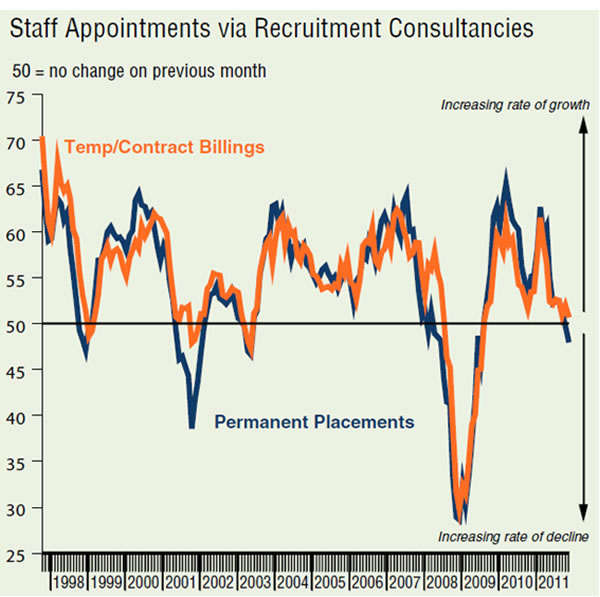 Today, we also had the latest Index of Production data (pdf) from the Office for National Statistics. This is important: although manufacturing and the other production industries account for less than one-sixth of GDP these days, the government’s economic strategy (2010 version) saw manufacturing exports leading the way to growth.

But, as Graph 2 shows, if we look at year-on-year changes in output over the past couple of years, we can see a pattern we’re starting to expect:

The REC/KPMG report is also worth reading for the comments the two organisations put out to accompany the publication.

Kevin Green, the chief executive of the REC, says:

“The government has done as much as it can in the short term to remove restrictions to employment and stimulate demand. However, if confidence doesn’t return quickly to get the jobs market moving again, the government may need to take more radical action in the New Year.”

It is unusual for major business organisations to call for “more radical action” to stimulate demand, but the comments from Bernard Brown of KPMG are even more thought-provoking:

“Whilst most commentators suggest unemployment will peak lower than 3 million, this figure may be tested in the year ahead.”

One of the mercies of the 2008-9 recession was the limited impact on unemployment. A number of forecasters confidently expected ILO unemployment to pass the 3 million mark and were proved wrong; the 2.5 million peak was at the bottom end of my own range, I’ll have to admit. As a result, most people have been more circumspect this time round.

The Office for Budget Responsibility forecasts (pdf) unemployment to peak at 8.7 per cent next year, which would correspond to about 2.77 million, about 150,000 higher than today’s figure. New independent City forecasts (pdf) for claimant count unemployment collected by the Treasury expect the peak a year later, at 1.76 million, about 80,000 higher than the 2011 average.

If Mr Brown is right, the labour market risks heading back to levels of unemployment unseen since the last time the Conservatives were in government.