Left Foot Forward’s Ed Jacobs looks ahead to the political situation in Scotland in 2012. 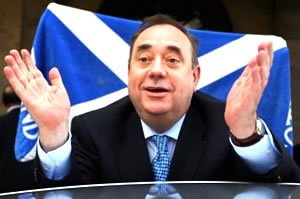 For opponents of an independent Scotland, 2011 has proved frustrating to say the least. Despite arguing that Alex Salmond and the SNP’s pet project is somehow a minority sport, serving only to distract the government from the more important challenge of the economy, little traction has been made in denting the SNP’s popularity.

Having so masterfully secured an outright majority for the SNP in May’s elections to Holyrood, seen off all three leaders of the main opposition parties, seen an SNP MSP installed as Presiding Officer of the Scottish Parliament and witnessed polling at the end of the year suggesting the SNP has seen its popularity increase since the elections, Alex Salmond would be forgiven for thinking that he was king of all he surveyed, leader of the only single majority party government in the UK and up against  a deeply unpopular coalition in Westminster.

The circumstances in which he now finds himself advocating independence could hardly be better. Little wonder therefore that for many, Scotland’s first minister is the politician of the year.

As Scotland’s political and chattering classes look ahead to the new year, it is hard to see Salmond not continuing to dominate in the face of divided and weakened opposition. For Scottish Labour, Conservatives and Lib Dems, therefore, 2012 will collectively be a crucial year, the year in which they have to figure out how to effectively “do” opposition against the SNP machine.

Whilst opponents will be seeking to bring the centre of political debate back to the economy, the reality is that independence will loom large and it is how they respond to that that will determine where the chips fall next year.

Faced with an electorate which, as outlined by Andrew Hawkins, chairman of ComRes, is increasingly coming to view so called “Devo-Max” as the option they would prefer, providing Holyrood with all powers – including fiscal autonomy – whilst keeping foreign and defence policy within the purview of Westminster, Labour, the Conservatives and the Liberal Democrats now find themselves seriously weakened in their opposition to independence, riddled as they are with splits and divisions over how to respond.

For the Conservatives, the party’s new leader north of the border, Ruth Davidson, has already made crystal clear she will oppose any new powers beyond those envisaged in the Scotland Bill being considered by the House of Lords being transferred to Holyrood. Scottish Lib Dem leader, Willie Rennie, has committed himself to a form of Home Rule whilst Scottish Labour don’t year seem to have figured exactly where they stand, as outlined earlier this year by Herald columnist, Iain Macwhirter.

On the face of it, the idea of opposition parties in Scotland being unable to reach a common agreement in Scotland would, in usual circumstances, be not just normal but positively encouraged by the party grassroots. After all, for Scottish Labour in particular, it would be electoral suicide to be seen to be associated in any way with either the Conservatives or Lib Dems.

Indeed, for many in the party, there’d be more of a chance of Hell freezing over then them campaigning with either party currently controlling Whitehall. But the reality is that the lesson from the “Yes” campaign for the Alternative Vote in May is that it failed largely because it had been riddled with divisions, unable to formulate a clear and coherent message, and seemingly obsessed more with who would appear on stages alongside whom.

In Scotland, until such a clear message can be established around which all parties against independence can coalesce around, talk of Westminster imposing a referendum on Scotland early is foolhardy to say the least.

As the Herald’s editorial on Christmas Eve clearly explained:

To win a referendum vote, the Unionist parties need to run a joint campaign with politicians who have established credibility in Scotland from all three parties.

This is proving a problem.

Jim Murphy, the former Scotland Secretary, for example, has already refused to share a platform with David Cameron. Those now in the House of Lords, such as John Reid,who has already stood shoulder-to-shoulder with Mr Cameron in opposition to change to the voting system for General Elections, may decline to pick up the gauntlet.

It is essential, however, that the people of Scotland are presented with clear and reasoned arguments about the far-reaching consequences of their vote. The reality of the future of the economy, the armed forces, membership of the EU and foreign relations are of greater significance than the date of the referendum.

Whilst Labour, the Tories and the Lib Dems will be keen to shrug off talk of independence as a distraction from the key issue of the economy, the reality is that it will continue to dominate Scottish politics like the proverbial elephant in the room.

Opponents at Holyrood can seek to come up with all the policies they like, but until they can figure out and figure out quickly a coherent campaign strategy to stop Alex Salmond’s independence wagon it will prove merely tinkering at the edges since it will be from deciding where Scotland’s future lies that opposition parties can then figure out how to take the country forward.

When outgoing Cabinet Secretary Sir Gus O’Donnell warned of the dangers of Scottish independence it was as much a swipe at the unionist parties for their failure to figure out how to respond to the threat it now poses to the UK. Until Scotland’s opposition parties can figure out how to do opposition then the message for those in Westminster calling for a referendum early is clear – be careful what you wish for.