Ed Jacobs runs through Scotland, Wales and Northern Ireland’s responses to the strikes. 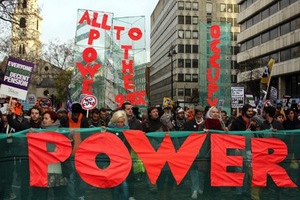 As the news remains dominated by the reactions to the public sector strikes, DUP Ministers in Northern Ireland have found themselves isolated in failing to support the action being taken by public sector.

In an area of the country most acutely feeling the pain with all public transport coming to a complete standstill, DUP finance minister, Sammy Wilson’s declaration that Northern Ireland can “ill afford today’s action”, whilst in many respects a sign of the blatantly obvious, was one which saw him isolated not just from fellow members of the executive at Stormont but from his ministerial colleagues in Wales and Scotland.

Sinn Fein’s education minister, John O’Dowd, who until just a few weeks ago had held the post of acting deputy first minister, together with his party colleagues committed to not crossing picket lines at the assembly.

Whilst understanding the disruption Wednesday caused, he laid the blame for it squarely at the feet of the UK government.

For the SDLP meanwhile, in calling for the Northern Ireland executive to take greater action of its own to protect public sector pensions, the party’s deputy leader Dolores Kelly declared:

“We recognise the economic difficulties we are in at present, and our representatives are working flat out to help nurse the economy back to health, but we will be standing shoulder to shoulder with hard-working public servants who only want a fair deal for a job well done.”

In Wales, meanwhile, the Welsh Assembly was forced to abandon a plenary session as Labour Assembly Members decided not to cross the picket lines of striking assembly workers.

In a statement sent to Left Foot Forward, Ministers in the Assembly Government explained:

“As a Government, we understand fully that with a two year pay freeze, rising fuel costs, inflation at per cent, and the threat of redundancy – public sector workers right across Wales are facing an extremely tough time at the moment.

“We are particularly concerned about the impact the UK Government’s proposals will have on women – who make up the majority of low paid public sector workers. It is clear, they will bear the brunt of the proposed changes to public sector pensions and we do not believe this can be right.

“Over recent days, the rhetoric emanating from UK Government Ministers, has not helped the situation and we believe this demonstrates an urgent need for them to reassess their approach to this dispute.

“Wednesday proved that urgent action is now needed and we urge the UK Government to get back to the negotiating table with a more imaginative set of proposals and a more positive attitude than has been the case to date.”

While in Scotland, a spat has broken out between the Scottish Labour and Green Parties and the SNP following a decision by the Scottish Government to cross picket lines outside Government buildings and the Parliament itself. As Holyrood debated the issue of public sector pensions, Finance Secretary, John Swinney sought to tread a fine path between condemning the strikes whilst simultaneously condemning the coalition. Speaking to BBC Radio Scotland’s “Good Morning Scotland” he declared:

“I don’t support the strike action – and I’ve already crossed a picket line to come into St Andrew’s House. I did that because it’s my duty as a minister in the Scottish Government to carry out my responsibilities on behalf of the people. I will go to Parliament later on today and I will lead a debate on public sector pensions.”

He went on however to have say of the UK government’s handling of the situation:

“I think what the United Kingdom government has done has been very damaging to the industrial climate of Scotland. We have a long-term debate about the sustainability of pensions, which I think is a fair and reasonable debate to have. Our prospects of resolving it satisfactorily have been contaminated by the short-term cash-grab of the Treasury to increase people’s contributions to their pensions.

“I think that has badly undermined the climate of trying to deliver long-term sustainability to pensions in this country.”

For Labour’s Iain Gray, however, it is the plight of those public sector workers who face devastating cuts to their pensions which matters most, concluding:

“They don’t think it’s fair and it’s the right thing that I should support them.“

“On a day like today, I don’t think it’s possible for a political party to be on the right side of the argument and on the wrong side of the picket line.“