Mark Pack presents a fantastic infographic containing all the knowledge you need to know about Liberal Democrat rebels.

Liberal Democrat peers used to be in a remarkably privileged position in the party. Not only because they have held office without the pesky need for elections but also because for many years the third party in the House of Lords has been the key swing vote when the government has been wanting to get legislation through.

That has meant many peers were well used to having direct access to ministers, and moreover being in a strong position to extract some concessions. As a result, many peers can point to numerous changes they have achieved to legislation.

By comparison, Liberal Democrat MPs, despite having the democratic mandate, have usually had very little power as votes in the Commons have been a foregone conclusion.

But since the party has gone into coalition, the balance of Parliament influence amongst the party’s peers and MPs have reversed. Rather than being the key swing vote, Liberal Democrat peers are now but part of an overall coalition government majority.

In the Commons, many Liberal Democrat MPs are now in government. It is not even a matter of it being easier to get to talk to a minister, they are the minister.

That is why over at my day job, MHP Communications, we’ve put together this infographic looking at the Liberal Democrat rebels: 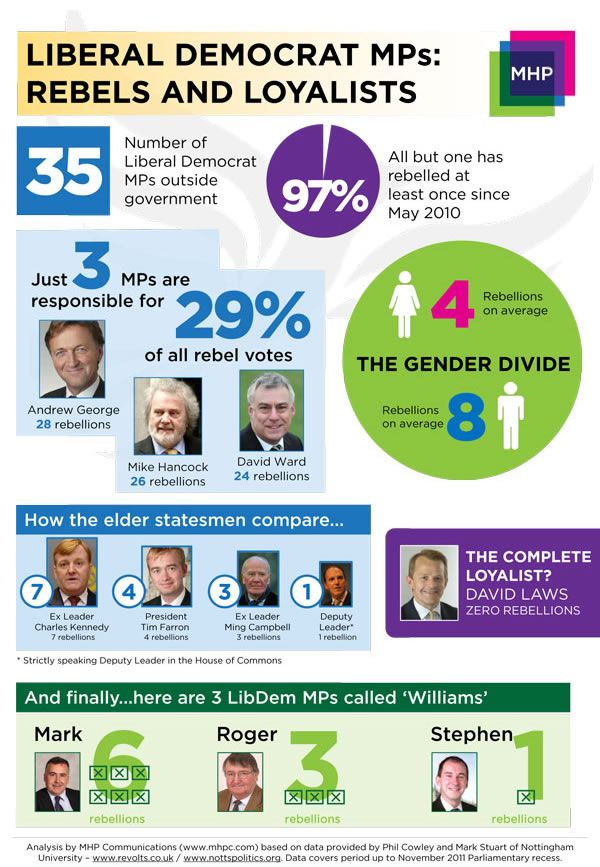 The most rebellious and the least? Andrew George 28; David Laws 0.