Ed Jacobs brings us the latest from Dublin as the Irish government grapples with the eurozone crisis. 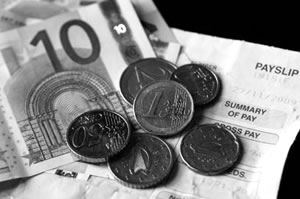 Just a day after Irish Taoiseach Enda Kenny used an address to the nation to warn the pain of the budget would be felt by every citizen, the minister for public expenditure and reform Brendan Howlin yesterday unveiled a package of measures, dubbed by Sinn Fein as a “budget of broken promises”, as a precursor to the formal budget announcement due later today by finance minister Michael Noonan.

“There is no hiding from the fact that, as a government, we must take very difficult decisions. But these are decisions that we must take in the long-term and strategic interests of the State and its citizens.

“We are going through a painful process of adjustment. Public anger is acute because the public was not responsible for putting us in this position.

“Twelve months on from the arrival of the Troika we have seen some improvement. Our position has stabilised. Twelve months ago we were Europe’s problem. Now problems in the European and global economy threaten our recovery.

“As a Labour Minister I never expected that I would be making the type of announcements I am making today. We have been forced to make difficult and unpalatable decisions. But we, as a government, are committed to being honest and upfront with people in the hard choices that we must make.”

In a statement in which he outlined “fairness” as his guiding principle, the minister went on to set out a series of measures likely to be felt for some time to come; these include:

• Total savings in 2012 will amount to €3.8 billion to deliver a deficit of 8.6% of GDP, of which €1.4 billion will come from cuts to government spending, the equivalent to 2.7 % of total current spending;

• Payments made under the cold weather allowance will be cut by six weeks;

• The back to School clothing allowance is to be abolished for all two and three year olds;

• €543m in net savings will be made to health spending including a 2% cut in disability, mental health and children’s services, saving €50m;

• €132.3m savings are to be made in education, including a 2% cut in Higher Education funding (€7m saving) and €19.2m in cuts to trainee and apprenticeship schemes;

• €79m will be cut in spending for the national police force, An Garda Síochána which looks set to see 31 police stations close;

Responding to the announcement, the main opposition Fianna Fail party sought to attack the government for a budget described by the party’s spokesman on public expenditure and reform as “a triumph of spin over subsistence”.

Seeking to outline how perks for government officials seemed to be about the only thing increasing, Sean Fleming told the minister:

“You are cutting public sector numbers, you’re cutting capital the expenditure programme. There is not a single initiative to create a job, next week, next month or next year. Everything you’re doing is cutting jobs…

“The government has been careful to protect some of your well paid friends and cronies. We have seen the Taoiseach has personally ensured a 35 per cent increase for one of his own friends.”

“Minister Howlin said that as a Labour Minister he never expected to have to make the announcements he made today. The more pertinent point is that he and the Labour Party led the Irish people to expect very different decisions and choices.

“Last night An Taoiseach told struggling families and working people that they were not responsible for the crisis yet today the government has begun to deliver a budget targeting these very same people for a crisis not of their making.

“Budget 2012 is totally at one with the last failed government. Fine Gael and Labour promised change. Today’s budget consigns all of these promises to the dustbin of two faced, sleeveen politics.”

With a day of further announcements due later today Ireland will be bracing itself for yet another round of measures likely to cause pain for families across the country, measures which have so far been praised by members of the eurozone.

Elsewhere, as the euro crisis rumbles on – with calls ahead of this week’s crunch EU Summit by German Chancellor Angela Merkel and French President Nicolas Sarkozy for a treaty change – the Irish Independent has called on Enda Kenny to show greater leadership within Europe.

Demanding changes to the culture and ethic within the world banking industry, the paper says:

“As the discredited old men of the European Commission flirt with the economic abyss, it is time this administration remembered the wise old political advice about keeping ‘your friends close and your enemies closer’.

“We may not be quite sure whether Germany is our friend or our enemy, but whilst the medicine of austerity mixed with institutional change which Ms Merkel wishes to impose on us will not be very nice, the ‘something worse’ that would inevitably follow a break-up of the EU will be a great deal more unattractive.

“Instead of strutting around indulging in the current politics of Ne Temere, Mr Kenny should recognise Germany’s pressing need for a referendum on institutional change is Ireland’s opportunity. If Ireland wishes to play a positive role in the current crisis we should also recognise we have lessons to teach European elite that increasingly resembles the drowning man who refuses to take his boots off lest their feet get cold.

“As the Irish experience – where banking debt collapsed the credit rating of the sovereign state – infects the Continent, the most important message we can send is that banking reform does not simply consist of giving banks a flood of capital – garnished from the future of the nation’s taxpayers – and that any rescue must come with an attached codicil of an end to the culture of obscene pay and bonuses.”