Josh Ryan Collins writes that the Vickers report, which is aimed at propping up bad banking, needs to go further, and encourage the creation of good banking: local, fair, safe banks, that aren't too big to fail 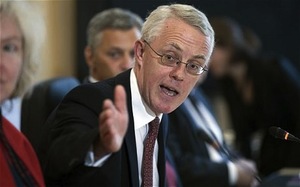 The Government has agreed to adopt the Independent Commission on Banking’s (ICB) reform proposals for how to make British banking safer and more competitive ‘in full’.

This is a relief, given the power of the banking lobby, but no cause for celebration or complacency.  We need to be quite clear about the limited scope and ambition of the Vickers’ commission. This was about how to make a dysfunctional banking system less likely to completely fall apart.

In other words, it was about propping up bad banking, not creating good banking.

It’s not even clear that the ICB’s proposals will make the UK financial system safer any time soon. The banks have been given at least another four years to implement the reforms, ring-fencing retail from investment banking activities.

That’s four more years of the tax-payer being on the hook whilst banks are free to carry on using funds from their retail deposit base to create exotic and risky financial instruments and speculative investments.

Given the financial crisis hit us in 2008, that’s almost an entire decade the UK financial sector has been given to sort itself out.

Contrast this with the pace of change expected of other extremely complicated and vitally important public institutions like the NHS, which have been forced to completely restructure and massively reduce costs in just a couple of years. Double standard is putting it mildly.

And even when the ring-fencing of retail banking does come in to force, we will still be saddled with banks that are ‘Too Big to Fail’, enjoying huge public subsidies. Despite the emergence of Metro, Virgin Money and most encouragingly, the sale of Lloyds branches to the Cooperative bank, the UK will still have one of the most concentrated retail banking sectors in the West, with all the risks that brings with it.

Sadly Vickers didn’t seem to grasp the fundamental point about the modern monetary system: that banks’ create and allocate new purchasing power in the economy, through their lending. The government and the central bank are not permitted to do this because of our membership of the EU. So banks play an vital macroeconomic role, the aggregate of their lending decisions shaping the trajectory of our economy.

The fact that the majority of new money in the economy is created by banks for non-productive activity (financial speculation and mortgage finance) appears not to be of great importance to Vickers or the government.

Rather than focusing on how to prevent banks creating another enormous housing asset bubble, the report instead advocates having a bit more of a buffer in the hope things won’t be as bad next time around.

As the last two years and the failure of Project Merlin have demonstrated, it is not enough simply for the government to ask banks to start lending to the productive sector.

Structural change is required to get credit flowing to manufacturing, infrastructure and small and medium sized enterprises.

As in Germany and Switzerland we need to develop a local and regional banking infrastructure that is set up to lend and develop relationships with small and medium sized enterprises. Devolving the Royal Bank of Scotland into a set of city or county-owned public banks across the UK would be a great start here.

Measures must also be taken to suppress lending that causes asset bubbles to develop. Today’s announcements about tougher mortgage regulation by the Financial Services Authority is a step in the right direction but more could and should be done.

The government needs to start worrying more about private debt levels and less about public debt, for it is the former that threatens the stability of our economy if recession kicks in again.

More direct interventions should be considered, including for example differential leverage ratios for different sectors as suggested by Adair Turner. Since Vickers has failed to address this issue, we must hope the Treasury and the new Financial Policy Committee (pdf) take up the challenge.

18 Responses to “Implementing Vickers won’t stop the next crisis”