Alex Hern gives a four-step guide to being Jeremy Clarkson. 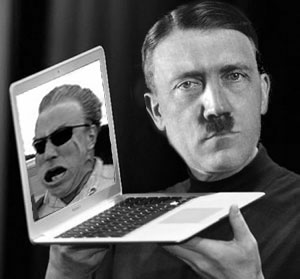 Left Foot Forward has previously brought you how to write a Richard Littlejohn column and a three step guide to writing a Simon Heffer column. Now, in our ongoing quest to ensure that no-one need read these people ever again, we present number three in an occasional series: How to be Jeremy Clarkson.

1. Present yourself as a humourist.

This is very important. The views you will be stating will largely be indefensible. This is alright if you’re Richard Littlejohn, and content with spending much of your time in a gated community in Florida, but if you want to stay in with the Chipping Norton set, you probably can’t be a pariah.

So, the first thing to do is make sure that you say everything in a silly voice, and only use overblown analogies. Because that’s what being funny is, right? So you can describe submarine warfare (£) as:

You sneak up on an enemy, in big, atomic, softly-softly slippers, flick his ear and then run off and hide.

Or call describe the European Space Agency’s space freighter (£) as:

like a wheelie bin that’s got tangled up in a teenager’s crusty bed sheet.

All harmless fun. Not actually particularly compelling reading, but it’s good enough too keep up appearances. It’s just a joke!

2. Slip in some prejudice.

Not a huge amount – you don’t want anyone to get really angry at this point, but you need to prime your audience with the idea that “he says what we’re all thinking” (for certain values of “we”). So when imagining a conversation with the Indian government (£), begin with:

Right, so you walk into a meeting with Mr Patel…

Describe the Greek bailout as the EU governments (£):

having to give all their spare cash to Stavros.

Or in a story about Britain from the air, this delightful little paragraph (£):

At present, escort girls ply for trade by leaving cards in telephone boxes. Why? The only people who use a telephone box these days are people who are desperate for a wee. So why not put a photograph of yourself, a phone number and a brief list of services you offer on the roof of a warehouse in Hammersmith? One Korean jet and you’d be rushed off your feet, literally, for a month.

A bit off colour, but nothing individually big enough to spark complaints. And if there are some, it’s just a joke! The BBC will respond by saying something like:

“Jeremy’s colourful comments are always entertaining, but they are his own comments and not those of the BBC. More often than not they are said with a twinkle in his eye.”

You’ve now got an audience who like you for perpetuating mild racial stereotypes. But how do you grow this audience? Simple, really. Say something which means your column, TV show, or guest appearance is endlessly repeated over all media for a week.

The people who condemn you were never going to buy your DVDs anyway, but more people who secretly agree with you will become fans than you’d ever get if you remained a mediocre car reviewer.

So if you’re reviewing a Korean car, claim that the designer

had probably eaten a spaniel for lunch.

If you’re talking about gay rights, say that you:

demand the right not to be bummed.

Or if you’re mocking the BBC’s requirement for impartiality, why not follow up a comment that you liked the lack of traffic on a strike day by saying of public sector workers:

“I’d have them all shot. I would take them outside and execute them in front of their families.”

If you’ve done your preparation right, you will be invulnerable to criticism. Because it’s all just a joke, right?

People who are hurt and upset by your comments just have no sense of humour. Even if what you joke about isn’t a joking matter. Even if someone citing your writings has literally shot people.

4. Laugh off the criticism, and sell more DVDs.

Very important step, this one.

30 Responses to “How to be Jeremy Clarkson”