Alex Hern runs through the unemployment figures. Despite minor good news for Northern Ireland and the East of England, they remain grim. 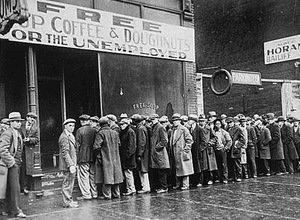 Today’s unemployment figures show that the number of people out of work has hit a seventeen year high, with female unemployment even worse.

The Telegraph reports the statistics:

In a series of grim figures delivering a pre-Christmas blow to the Government, the jobless toll for all age groups rose by 128,000 on the quarter to 2.64 million, the highest total since 1994. The unemployment rate was 8.3 per cent, up 0.4 per cent on the previous three months, said the Office for National Statistics.

The number of women out of surged by 45,000 between August and October to reach 1.1 million, the highest figure since 1988.

The young were also badly hit with the number of 16 to 24 year-olds out of work reaching 1.026 million between August and October – the highest since records began in 1992 and a rise of 54,000 on the previous quarter, the statistics out on Wednesday revealed.

The number of people claiming jobseeker’s allowance last month also increased by 3,000 to 1.6 million, the highest total since the start of 2010, the figures showed.

Average earnings rose by 2 per cent in the year to October, 0.3 per cent down on the previous month and continuing the squeeze on workers.

Drilling down into the data reveals some interesting facts. As Will Straw pointed out, there have been:

Government plans for “expansionary fiscal contraction” and their desire to “rebalance the economy” both require departmental spending cuts to be more than offset by private sector growth, but this just doesn’t seem to be happening; right now it takes 13 public sector jobs lost to create one private sector place.

A report out today by the Chartered Institute of Personnel and Development indicates that the 2011 labour market may be more gender-equal than it was in 2010 – both sexes are now hit hard.

Its analysis of official statistics suggests that the number of unemployed women has fallen, albeit very slightly, relative to that of men in 2011 and that men, not women, have been hit hardest by the substantial loss of part-time jobs in 2011.

“What we do know is that the relative position of women has not so far worsened as much as commonly perceived or was widely anticipated given the high concentration of women workers in the public sector and in part-time jobs more generally.

“This might indicate that the impact of economic austerity will prove to be more gender balanced than at first thought, although it also underlines how tough things are becoming for both sexes in our increasingly depressed jobs market.”

Finally, although the economy remains in a poor shape nationwide, there is still major regional variation.

The leaders in unemployment rate remain the North East and London, with 11.5 and 9.9 per cent of the workforce out of a job, while Northern Ireland and the East Midlands were the only two regions to see an improvement in their situation, with unemployment falling by 4,000 in each – a six and two per cent fall respectively.