Ben Fox reports from Brussels with the latest on the eurozone crisis, looking at whether Herman Van Rompuy will save David Cameron from a referendum. 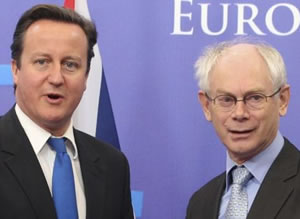 Like the rest of Europe, Britain has been hit by a wave of euro-fever this week. With the Tory party on the verge of open revolt at the prospect of David Cameron signing up to a new treaty without new opt-outs, the prime minister promised to win safeguards for the City of London in any treaty negotiations.

Today’s Prime Minister’s Questions was dominated by the crunch EU summit on the euro.

But the prime minister might be saved by the report by EU Council President Herman Van Rompuy which will be presented at tomorrow’s summit. Left Foot Forward has a copy of the report which shows the fine balancing act Van Rompuy is trying to maintain among EU leaders.

Van Rompuy takes on board the Merkozy approach of establishing a “golden rule” for balanced budgets for eurozone countries and for automatic sanctions and fines for countries that breach the debt and deficit rules.

More controversially, he proposes the European Commission could be given emergency powers over national economic policies for countries receiving a bailout package.

But unlike the ‘Merkozy’ approach of a full treaty change, Van Rompuy argues that changing the treaty provisions on Economic and Monetary Union (EMU) could be done either by revising several of the protocols annexed to the treaty or by using the simplified procedure. The simplified procedure can only be used to change existing policies carried out by the EU, not for increasing powers.

Changing the protocols just needs the approval of EU leaders, while the simplified procedure has to be approved by national parliaments – neither would involve a referendum.

The Van Rompuy report also looks at ways to deal with the current crisis, particularly at ways to stabilise the sovereign bond markets – these include:

• Giving the ESM a banking licence and allowing it to directly re-capitalise Europe’s vulnerable banks;

• Rapid deployment of the leveraged EFSF;

• Increasing the financing available to the IMF.

Although it’s difficult to tell how the summit will go – today the Merkozy alliance called for a common corporation tax and financial transaction tax – it is clear that, Merkel and Sarkozy aside, there is no great demand for a new treaty. At a time when many eurozone governments are finding it increasingly difficult to cope with volatile bond markets, most leaders do not want to get bogged down in months or years of treaty negotiation.

As for Cameron, under pressure from his party to win opt-outs and hold a referendum on a new treaty, Van Rompuy’s report might get him off the hook. It would not give Cameron his “City safeguards”, but by steering clear of a full treaty negotiation it would give him more chance of avoiding a referendum.

• Liquidity is no substitute for solvency – so why are we pushing for the former – Ben Fox, December 2nd 2011

12 Responses to “Will Van Rompuy save Cameron from a referendum?”