Alex Hern examines whether there are any areas left for the Liberal Democrats to hold firm on - or have they compromised on every policy going? 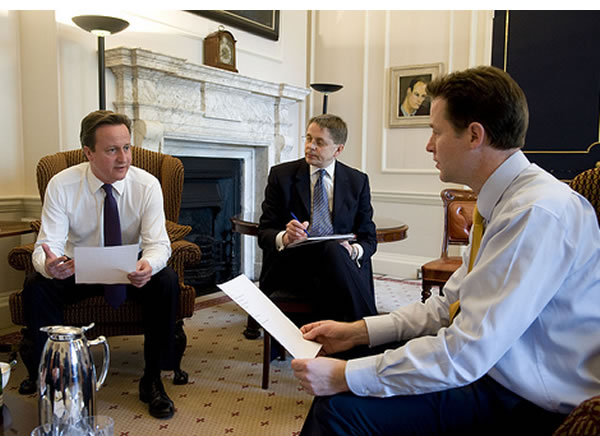 Throughout this Eurozone crisis, we’ve heard a lot about David Cameron’s ‘red lines‘ on Europe – the measures he absolutely will not agree to, no matter what the result.

But what we have heard little of are the ‘yellow lines’; those areas which the junior partner in the coalition will not compromise on.

If you had asked grassroots Liberal Democrats twelve hours ago, they may well have told you that Britain’s role in the centre, rather than the periphery, of the EU was one of those lines.

Nick Clegg himself gave that impression in November, when he said:

“We must move together. The greatest danger we face is division. That is why, while the United Kingdom fully supports deeper fiscal integration within the euro zone to support monetary union, we would not wish it to become a club within a club.

“To retreat from each other now would be to leave ourselves isolated in extremely tempestuous times.”

Today, he is singing a different tune:

“The demands Britain made for safeguards, on which the Coalition Government was united, were modest and reasonable. They were safeguards for the single market, not just the UK.”

The question on the lips of Liberal Democrats today must be: Are there any areas on which Nick Clegg will not compromise?

The common view of the Lib Dems before the election was as the party of students, civil liberties and Europe. The betrayal on the first of those three is legendary. The Lib Dems went from a manifesto committment (pdf) to “scrap unfair university tuition fees” (p33) to voting for a near tripling of those fees.

The party hasn’t been much better on civil liberties. Their commitment to end child detention has become a commitment to end some types of child detention. They have supervised a creeping militarisation of the police, been silent on the use of kettling during peaceful protest, and voted for removing the right to see a solicitor for free after arrest.

These may have been what Lib Dem voters thought were the priorities, but the leadership can reasonably claim that they detailed four very different priorities (p6-7):

• Fair taxes that put money back in your pocket

• A fair chance for every child

• A fair deal by cleaning up politics

Are these the yellow lines? That doesn’t look hopeful either.

The Lib Dems did manage to pass measures raising the tax threshold to £10,000, but as we’ve reported, by breaking the key promise – that they would be “paid for in full by closing loopholes that unfairly beneﬁt the wealthy and polluters” – and instead paying for it with the VAT rise, the overall package becomes highly regressive.

Making Britain greener doesn’t look like its a no-compromise promise either. We’ve reported time and again (and again and again) about how the self-styled ‘greenest government ever’ is nothing of the sort. They’ve done no better on their promise to clean up politics. The right to sack MPs has been forgotten, civil liberties are on the back-burner, and they have been thoroughly stitched up on Lords and electoral reform.

So the Lib Dems’ last hope for something that they can point to as a line which they will not cross is their promise to children. The pupil premium is a mere reallocation of funds, and class sizes have risen since the election. The one promise that Clegg’s party have kept from their “first priorities” appears to be their pledge, in line with Gove’s reforms, to “give schools the freedom to make the right choices for their pupils”.

It appears that the only lines Lib Dems won’t cross are the ones which Tories don’t want them to. If that is the case, it is no wonder that grassroots activists told us this morning that they don’t know what to think anymore.

26 Responses to “What are Clegg’s yellow lines?”