Ann Pettifor explains how the current European Union summit is futile - we are in a global financial crisis, not just a crisis of the eurozone. 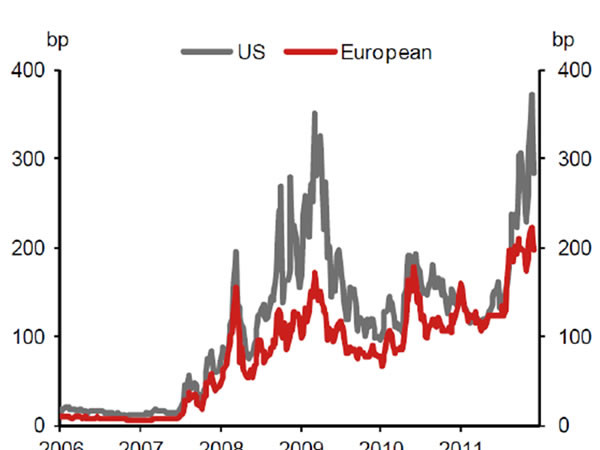 I have been banging on about how this is a global banking crisis, not a eurozone crisis, for some time now. So I find it poignant to watch European politicians and their advisers in Brussels, piling the pressure on their own shoulders and frantically sweating over a solution to “the eurozone crisis”.

The fact is the eurozone is a side show. This is a global financial crisis, and Graph 1 proves it. It shows the Credit Default Swap (CDS) Spreads on EU and US banks (hat tip to Uldis Zelmenis).

The incentive to burn it down and collect is a powerful one – which is why regulators bar you from doing so. But hey, in the City of London’s shadow banking system, anything goes. The rise in these CDSs, and the ‘spread’ or gap between the price of European and American bank CDSs, tells the whole terrifying story.

Namely, while naive European politicians are focusing the attention of their citizens on an issue that is largely marginal to the crisis – eurozone budget deficits – speculators are betting on something far more calamitous: a collapse of the global financial system.

And American banks are deemed more risky than European banks.

Given this context, it is deeply ironic the British prime minister is in Brussels today to defend the interests of the City of London. Ironic because it is the City’s “loose, lax and unregulated system” – not the US or Europe’s – that has got American banks into trouble, and is likely to precipitate a second, more destructive and prolonged systemic failure of the global financial system.

This failure – which daily grows more imminent – will quickly engulf the eurozone, and eclipse the more trivial issue of budget deficits that has so consumed EU leaders, Labour party politicians, and their flawed, and orthodox economic advisers.

The burning fuse that is likely to ignite this conflagration? A failed global financial derivatives broker, MF Global, run by Jon Corzine, formerly chairman of Goldman Sachs. According to Christopher Elias of Thomson Reuters, MF Global slipped the noose of US regulators to shelter within the ‘loose and lax’ systems run by London’s more obliging Financial Services Authority (FSA).

Now each day brings more evidence of how this lax regulation enabled MF Global to use its own clients’ funds:

“…to finance an enormous $6.2 billion eurozone repo bet… a position more than five times the firm’s book value, or net worth.”

The euphemism for this form of gambling with other peoples’ money is “hyper-hypothecation” – a device by which banks create billions of “liquidity” for their own purposes, much of which has no real asset backing. (I strongly recommend that interested readers study both Elias’s report from Thomson Reuters, and this piece by Tyler Durden for brilliant, if eye-watering analyses of the scam.)

Hypothecation is just another way of ripping off foolish investors to leverage Big Monies – or, to quote Damon Runyon, “Big Potatoes” – for the broker.

As Christopher Elias argues, the really scary bit is this: hypothecation by the shadow banking system may have enabled bankers and brokers to increase:

“…the financial footprint of Eurozone bonds by at least four fold. (If so) then a eurozone sovereign default could be apocalyptic.”

That is why yesterday, in a badly-timed action signifying deep alarm, the ECB cut its benchmark interest rate by a quarter – for the second month in a row – to 1%. But it was the ECB’s second action that betrayed the sense of panic that has engulfed Frankfurt.

Europe’s central bank ‘loosened collateral standards’ for all those shadowy banks borrowing for – amongst other forms of speculation – hypothecation. The ECB is acknowledging that most bank collateral is not real. It is phantom.

Touchingly, the banks supported by the ECB are not European banks. They are global banks and/or financial institutions with branches/subsidiaries in Europe, most of which shelter under the regulatory umbrella of the City of London. Their practices are not unlike those of MF Global; but the bulk of their losses, when they come, will almost certainly be transferred to the taxpayers of Europe.

The tragedy is this: when the global financial system implodes in an ‘apocalyptic’ collapse, both our politicians, central bankers and regulators will once again be guilty of wilful and gross neglect. Corrupted by financial interests; ideologically bound to the ‘light-touch regulation’ of monetarists and other quack-economists, they have (deliberately?) been distracted by a far less serious matter: the debts of sovereigns.

These, compared to the debts of the shadow private banking system, can be considered trivial. Furthermore, the rise in public debts is nothing but the consequence of the debts of the private financial system. Without fixing the broken global banking system, there can be little hope of even the European Court of Justice imposing and enforcing ‘budgetary discipline’.

Which is why today’s EU summitry is so futile.

• Liquidity is no substitute for solvency – so why are we pushing for the former? – Ben Fox, December 2nd 2011

• The coalition has flunked preparations for this banking crisis – Cormac Hollingsworth, October 10th 2011

29 Responses to “EU summitry is futile; this is a global financial crisis, not a eurozone crisis”