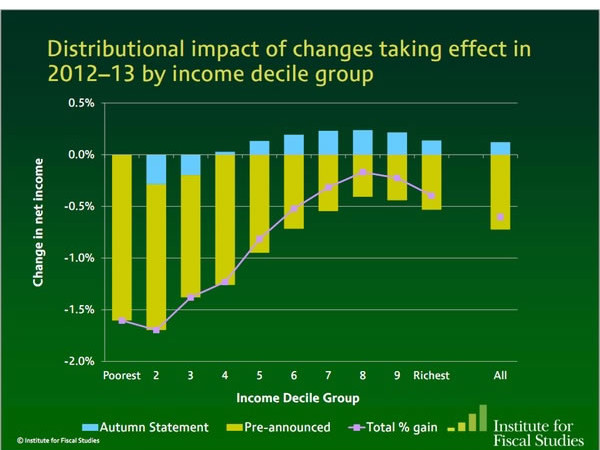 David Cameron again refused to acknowledge any facts which make him look bad today at Prime Minister’s Questions, but this time it was harder than ever to accurately feign ignorance.

Ed Miliband claimed that the autumn statement will mean:

“The poorest third will lose three times as much as the richest third.”

Cameron’s normal attitude would be to claim that the facts were wrong, safe in the knowledge that the fact-checkers aren’t in the commons with him. This time, however, Ed Balls had clearly planned ahead, by printing off a very large copy of the following graph (slide 10, pdf) and waving it at him (2:30 in the vid below):

It appears, however, that the prime minister is incapable of accepting the evidence which is literally in front of his face.

You can watch a video of the exchange below:

Look at the graph deniers squirm, just look at them.

• Kellner: The public don’t like the Tories, but they’ve signed up to their economic argument – Daniel Elton, November 28th 2011

• Cruddas: Big Society failing the “all in this together” test as safety nets go – Daisy Blacklock, April 26th 2011