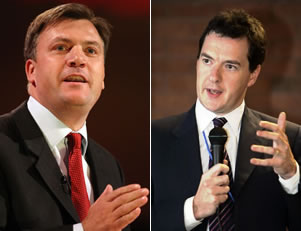 Ed Balls took aim at George Osborne during a raucous, six-hour debate on the economy yesterday, dismissing his economic strategy, imploring him to change course, and needling him over his “discreet steps towards the Tory leadership”.

Following a sedate Treasury Questions earlier in the afternoon, the chancellor and his shadow slugged it over the autumn statement, growth figures, unemployment figures, inflation, the eurozone crisis…

Among the highlights was Balls’s breaking off from the wonkery to quote an Osborne ally talking about his cunning plan for the Tory leadership:

“‘George has started taking discreet steps towards the Tory leadership, members of the 2010 intake of MPs are invited to discreet drinks at Number 11, the favourites are invited to bibulous soirees at Dorneywood…’

“‘Nobody in the Osborne circle is vulgar enough to talk openly about his leadership ambitions. George has no agenda, I’ve never heard any talk of a timetable,’ said an ally, ‘but the unspoken assumption is that the party would be a lot safer in George’s hands than with bonking Boris!’“

Followed by a glimpse into the chancellor’s Bullingdon past:

“Let me give you another one from one of the Osborne allies: ‘They were a bit sniffy about George, the Bullingdon is basically for Etonians, but they let him in even though he went to St Paul’s, though they did insist on him reverting to his original name of Gideon.’“

At the end of his 35-minute speech, Balls recited an article from the Telegraph – containing a rather apt analogy:

“We read in the Telegraph today about the chancellor’s recent efforts to land a plane at Manchester Airport. On a flight simulator I should add… Too rapid a descent, a crash landing on the runway, narrowly missing ploughing into the terminal building, too far, too fast, Mr Deputy Speaker, no surprises then.

“But the chancellor had a second go. With a little help from the experts, a steadier hand on the controls, things worked better second time round, perhaps there’s a lesson for the chancellor in that story, perhaps he should take my prescription after all, Mr Speaker.”

He then quoted Krugman’s devastating attack on Osborne – in which the Nobel Laureate called the chancellor to “a medieval doctor bleeding his patient, observing that the patient is getting sicker, not better, and deciding that this calls for even more bleeding” – before echoing the FT and his deputy Rachel Reeves in comparing him to Dr Pangloss.

“The worse things get in the rest of the world, the better for Britain, because we are the only safe haven of prosperity.

“In this chancellor’s Panglossian world, everything is working out just fine, Mr Deputy Speaker, but in the real world, in the real world, with the world economy darkening, with the UK now forecast to endure stagnant growth and rising unemployment this year, next year and the year after, this Panglossian chancellor is making a catastrophic error of judgement, refusing to learn the lessons of history, refusing to even understand the lessons of economics, refusing to shift to a more balanced plan, he got it wrong 18 months ago, he is getting it so, so badly wrong today, out of his depth, out of touch, isn’t it time he changed course before it is too late, Mister Deputy Speaker.”

At the end of the night, Labour won the division (which was actually about whether enough time had been allocated to debating the economy) 213-79, meaning, in theory, that there’s more economy debates to look forward to in the New Year – assuming Osborne can take it.