Alex Hern reports David Miliband’s remarks in the Financial Times, in which the former foreign secretary argues against an invasion of Iran. 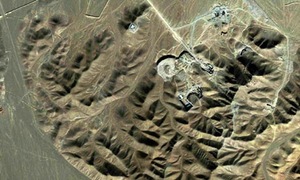 David Miliband has strongly spoken out against the risks of sleepwalking into a war with Iran.

Diplomacy must take the lead in preventing a major war with Iran – for that is what it would be. What is more, the regime faces at least four serious challenges of its own.

First, it is clear that sanctions, cyberwar and covert operations have impaired Iran’s progress towards a nuclear weapons capability, with most estimates holding that the regime is at least two years away from achieving it. To be clear, no one has made the case such an achievement is imminent.

Second, IAEA inspectors continue to monitor key installations and operations, providing a tripwire presence able to signal any dramatic change in policy or practice by Tehran. It would be disastrous if the fallout from the Iranian storming of the British embassy included the harassment or expulsion of inspectors by the regime.

Third, Iran’s strategic influence in the region is waning. Its sole ally in the Arab world, the Syrian regime, is badly weakened and probably entering an end game. Among the Arab public, Iran’s popularity has plummeted since the highs of the 2006 Lebanon war.

Fourth, and too often neglected, are the aspirations of the Iranian people. They have often shown that they do not share the regime’s hostility to the world and instead aspire to the same kinds of open government that the youth of the Arab world are reaching for.

He was insistent that we must not underestimate the risk of a nuclear armed Iran, however (£):

We subscribe to the view that the price of a nuclear-armed Iran would be very high – unacceptably high. Iran’s capacity to destabilise the region would increase considerably. The response from Saudi Arabia, Turkey and others would mean the end of the non-proliferation treaty. The chance that nuclear weapons would be used would be much closer.

Speaking to Sky News about the subject, Miliband was clear:

Iran might be “exasperating, difficult… destabilising the rest of the region” but military action would be unjustified.

If Iran develops nuclear weapons it would be unacceptable but they are at least two years away from this, he told Boulton and Co.

“Ingenious diplomacy” is key to stopping the situation escalating to war, the Labour MP added.

Miliband is just the latest in a line of experienced foreign affairs actors to speak out against the growing sabre-rattling about Iran. Hans Blix argued last month that not only would threats of war not prevent them from developing nuclear weapons, but could actively encourage them.

“Even threatening attack in my view is unwise, because most states that acquire nuclear weapons do so for perceived security reasons, and if they are threatened well then they will think “we’d better rush on and get them”. So if anything they need assurance that “no, you don’t need the weapon because you will not be attacked, but you will be squeezed, you will be treated harshly economically.

“The question is “can you scare a country into staying away from the weapon” and I think that’s unlikely. They did not do it with Iraq, the Israelis destroyed the Oserak reactor in 1981, but Saddam just moved on. In my view the better way is to try and reassure states that they don’t need nuclear weapons, because they will not be attacked from the outside. That goes for North Korea as well.”

Iran will know what the difference between Iraq and North Korea was, and the more we imply they should be treated like the former, the quicker they’ll try to become like the latter.

13 Responses to “David Miliband: Attacking Iran would increase the risk of nuclear war”