SNP MEP Ian Hudghton writes about the damage David Cameron’s abdication of responsibility in the European Union is having on Scottish fisheries. 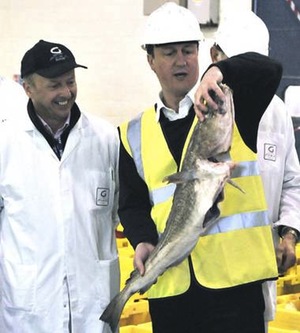 The tinsel is up in the shop windows of Brussels and the fairy lights are flashing. It means it’s that time of year again: the annual CFP circus comes to town where fisheries ministers from around the EU set the following year’s fishing opportunities.

The term “fisheries ministers” is of course used in its broadest possible sense – countries like Austria, Slovakia and Luxembourg don’t have any coastlines and so have minimal fishing interests.

But their ministers will still be in attendance, horse-trading the night away and winning concessions for their countries in other policy areas, such as agriculture.

Unlike in a real circus however, this clowning around isn’t remotely funny. The decisions taken each year have a direct impact on the livelihoods of tens of thousands of workers around Europe – and all too often for Scotland that impact is wholly negative.

Scotland accounts for three-quarters of the UK’s fish landings – and fisheries is therefore quite simply a low priority for the junior agriculture minister from England who will represent the UK at the talks.

When the UK was negotiating entry to the common market 40 years ago Ted Heath’s government famously stated that the fishing industry was “expendable” – and nothing has happened since to suggest that that attitude has changed.

This year however a whole new and sinister element has been thrown into the equation. A week ago David Cameron was seemingly walking a tight rope – trying to balance the views of his xenophobic Eurosceptic backbenchers on the one hand with the greater interests of all of Europe on the other.

But the boy was unfortunately a beginner – and mid-way through the performance he inexplicably dived head first off the rope, to the delighted cheers of the audience on the right. Unfortunately for him, there was no safety net – and potentially catastrophically for Scotland’s fishermen, we’re all being dragged down with him.

It is hard to overstate how serious this is for Scotland’s fishermen. The fisheries ministers from the Scottish and UK governments held urgent talks on Monday 5th December after the Commission took a decision in late November to slash the Scottish fleet’s days at sea.

Negotiations were ongoing – and it was always going to be a tough fight to reverse the Commission’s decision. Cameron’s nose-dive means things have just got much tougher – and this was perhaps evidenced by fisheries commissioner Damanaki’s comments to the European Parliament’s fisheries committee this week.

In a discussion on future funds for fishing, commissioner Damanaki claimed that some Member States have been failing to comply with fishing regulations and – unusually – singled out the UK for special mention. Could this be a glimpse of the future in the EU: a mere mention of the words “United Kingdom” guaranteed to get everyone’s backs up – and to allow the Commission to get its own way?

Welsh first minister, Labour’s Carwyn Jones, has said he is:

“…very worried that Wales could be disadvantaged by the prime minister’s anti-European rhetoric.”

“I don’t want investors to be put off bringing jobs to Wales because of concerns that their access to the EU market could be at risk.”

His Scottish counterpart, Alex Salmond, has written to the prime minister asking what risk assessment he had made ahead of exercising the veto and why he had not consulted the devolved administrations. In his letter Mr Salmond explicitly referred to the vital fisheries negotiations.

I suspect the answer is fairly self-evident and no risk assessment was made – no regard was had for Scotland’s coastal communities.

And so when Europe’s fisheries ministers gather at the end of this week they do so in an utterly changed Europe.  The UK government’s general low prioritisation of fisheries is now compounded by their new low standing within the EU.  Scotland’s fishermen have suffered under the CFP for some decades now; it is their further great misfortune that fishing is the subject of the first major negotiations after Cameron’s veto.

Ted Heath said that fishing was expendable; David Cameron seems to regard our whole relationship with our European neighbours as similarly expendable.

It’s time Scotland got off this sinking British ship – and joined the flotilla in the European mainstream.

• Is a ‘green populism’ possible, and can Labour help foster it? – Guy Shrubsole, September 26th 2011