Today's growth and borrowing forecasts are likely to be grim - they are just as likely to be over optimistic. 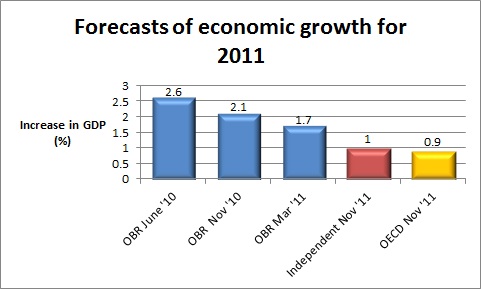 As part of chancellor Osborne’s Autumn Statement today, new growth predictions from the Office of Budget Responsibility (OBR) will be revealed.

All economic roads lead back to growth – less growth means fewer jobs, stagnating or falling living standards and further pressures on public spending. Disappointing growth has also led to the coalition expecting to borrow more than Labour was projected to if it had won the 2010 election.

But it is worth remember that, going on the track record, whatever Osborne announces as the OBR’s projections for growth are, the reality will almost certainly be worse.

Every OBR forecast for 2011 and 2012 has been subsequently downgraded. Here we compile the OBR’s predictions for 2011 growth, along with the OECD forecast and a round up on independent forecasts collated by the Treasury, both released this month:

These have come down drastically – from 2.6% on the snap budget following the election, to 2.1% in November 2010 and then 1.7% last March. However the independent forecasters collated by the Treasury and OECD reckon that growth this year will be as low as 1% and 0.9% respectively.

Similarly OBR predictions for 2012 have been similarly downgraded if not to the same extent. 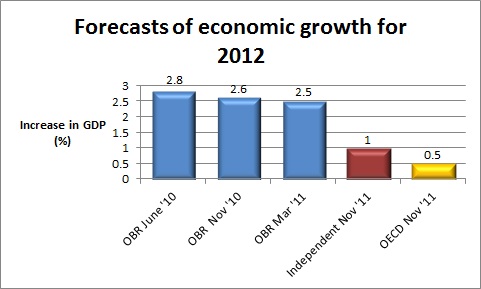 While these projections have only been reduced from 2.8% to 2.5%, the independent forecasters and the OECD say they expect UK growth of  1% and 0.5% next year.

However bad it sounds today, the reality will probably be worse.

17 Responses to “Whatever Osborne’s growth forecasts today, the reality is probably worse”