Will Straw examines the regressive nature of the chancellor's autumn statement 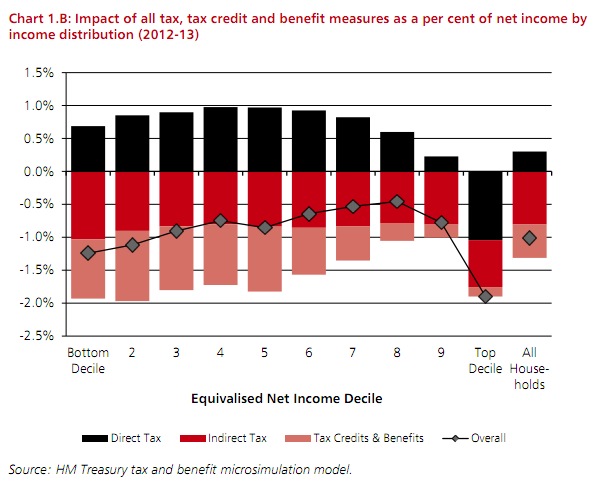 The small print of the chancellor’s autumn statement shows that the totality of tax, tax credit and benefit measures adopted by the coalition government or carried over from the previous Labour government will be regressive for the lowest 80 per cent of earners.

The latest analysis will further damage George Osborne’s claim that those with the “broadest shoulders should bear the greatest burden”.

Chart 1B of the supplementary document titled ‘Impact on households: Distributional analysis to accompany the Autumn Statement 2011’ (pdf) shows that those in the lowest income decile are the second worst hit by the totality of government measures, after the richest 10 per cent who face a 50p income tax charge on earnings above £150,000.

The line slopes upwards across the poorest eight deciles, showing that low earners are harder hit than wealthier families.

Measures announced today that will exacerbate this trend include the announcement that the government will not go ahead with the planned £110 above inflation increase to the child element of the child tax credit, and will not uprate the couple and lone parent elements of the Working Tax Credit in 2012–13.

After enduring two years of pay freezes, public sector workers including teachers and nurses will have to endure pay rises of a paltry one per cent for two years, saving the Treasury £1 billion by 2014-15.

George Osborne did not claim today that “we’re all in it together”. The reason is glaringly obvious.

• Kellner: The public don’t like the Tories, but they’ve signed up to their economic argument – Daniel Elton, November 28th 2011

• Cruddas: Big Society failing the “all in this together” test as safety nets go – Daisy Blacklock, April 26th 2011

• Lib Dem, Tory and Labour all in this together on financial regulation – Will Straw, January 24th 2011