The rich give less to charity than the poor, making David Cameron’s Tory mission to roll back the frontiers of the state are deeply, deeply regressive. 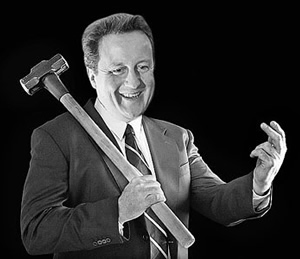 At the heart of the so-called “progressive Conservative” case is that the state has ‘crowded out’ society. In other words, that with the introduction of the welfare state, the general population expected government to deal with poverty, and so people stop giving as much and volunteering dropped off.

David Cameron’s vision is of a less active state, which is funded by taxes, and more active charities, funded by donations.

This could work if we could expect everyone to fullfil their responsibilities, and for example, the rich gave more to charity to the poor, as would only seem fair. Unfortunately they do not.

People earning less than £32,000 give on average more than one per cent of their income to charity, whereas those on more than £52,000 typically give only 0.8 per cent, according to research by the Charities Aid Foundation (CAF) and the National Council for Voluntary Organisations (NCVO).

Initial findings from the report UK Giving 2011, which will be published before the end of the year, were released at an event in the House of Lords yesterday. The figures came from a representative survey of more than 3,000 UK adults carried out in June and October 2010 and February 2011.

Speaking at the event, John Low, chief executive of CAF, called for people to give at least 1.5 per cent of their income to charity every year, with the percentage rising for the wealthier.

The third sector grew under Labour, with government ministers understanding the symbiotic relationship between state and society. Meanwhile, in Cameron’s Big Society, where state and society are seen to be in competition, cut-price welfare for the very poor is paid for by the donations of the middle-income to poor.

13 Responses to “Memo to Cameron: The rich give less to charity”