One of Scotland’s major teaching unions has warned that virtually every school north of the border now faces closure on the November 30th, reports Ed Jacobs. 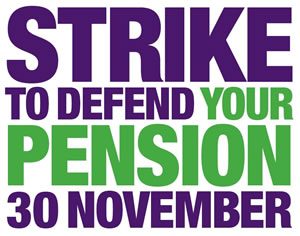 One of Scotland’s major teaching unions has warned that virtually every school north of the border now faces closure on the November 30th as public sector workers prepare for a day of action in protest against the UK government’s proposed reforms to public sector pensions.

The warning from the Scottish Secondary Teachers’ Association (SSTA) came on the day its members, comprising 9,000 secondary school teachers in Scotland, voted  in favour of industrial action, supported by 79.19% of the 66.3% of members who voted in the strike ballot.

Warning of the likely consequence of the action, following strike ballots having been carried by both the NASUWT and Scotland’s largest teaching union, the Educational Institute for Scotland, Ann Ballinger, General Secretary of the SSTA, warned:

“It is now virtually certain that 99% or more of Scotland’s primary and secondary schools will be closed on November 30. We regret that the government has done nothing to change its view on the more damaging aspects of its pension proposals.”

Arguing that the coalition government’s behaviour in the negotiations was akin to that of a “Victorian millowner”, Ballinger continued:

“How many of the current cabinet would have a clue?

“The latest government threat that the current ‘offer’ will be withdrawn if strikes go ahead exhibits the level of thinking prevalent in the current Westminster government. We see an approach to public service which would be on a par with that expected from a Victorian millowner for whom every penny spent on the workforce is seen as a disaster.”

The news of yet another union preparing to walk out just a day after cabinet office minister, Francis Maude, warned unions the government would be prepared to harden up laws concerning strike action came as the SNP and Scottish Labour engaged in a spat over support for striking workers.

Having dubbed Whitehall’s plans for a shake-up of public sector pensions as a “naked cash grab”, Cabinet Secretary for Finance, Employment and Sustainable Growth John Swinney has since explained he will be prepared to cross picket lines at Holyrood on the 30th in order to attend a debate on the pensions.

His stance, however, has promoted Labour’s Richard Baker, a supporter of the day of industrial action and the shadow finance secretary, to accuse Swinney of preferring to “play political games and score political points” rather than supporting hard working public sector workers.