Ed Cox and Will Cook detail the failure of the government to “rebalance” the economy, either in terms of North/South divide or Public/Private balance. 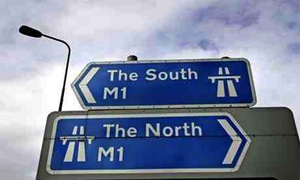 Ed Cox is Director of IPPR North and Will Cook is a Research Fellow at IPPR North, IPPR’s dedicated think tank for the North of England

David Cameron’s commitment to ‘rebalancing the economy’ was first articulated in a Newsnight interview during a visit to the North East prior to the general election in 2010.

The focus of rebalancing at that time was twofold: a significant change in the proportions of public and private sector jobs in the North of England; and a significant shift in emphasis from economic growth being driven by London and the South East towards a UK economy growing in a much wider number of cities and regions.

Since then the rebalancing rhetoric has become much more convoluted. Some argue that rebalancing is all about sectors and the manufacturing/financial services mix; others believe it is all about driving UK exports.

Whilst these factors are not without consequence in the wider rebalancing debate, it is time for government to refocus its concern on the spatial imbalances that undermine any sense of one nation politics.

The public-private transition takes time and a government hellbent on demolishing regional development agencies and making front-loaded council cuts made no provision for a soft landing.

What is perhaps more alarming though is that during the same period, public sector jobs in London and the South East actually rose by 32,000 – ironically, the same amount of jobs lost in the North East.

The all too common disparities between North and South could be put down to sampling errors within the ONS data – and public sector jobs figures do contain a few private sector ones too – but this is unlikely to have a significant effect on the overall pattern. Further IPPR North analysis on 4 online jobs websites (Reed, Guardian, Civil Service and Local Government Jobs) substantiate the ONS results:

• On Reed.co.uk (allegedly the UK’s number one jobsite) there are more ‘public sector jobs’ advertised in London and the South East than in the rest of the country put together; there are 1062 vacancies in the South East compared to just 67 in the North East.

• There are six times as many vacancies advertised on guardian.co.uk for the government sector in London and the SE compared to the whole of the North, despite the population only being ten per cent larger.

The growing evidence for the disparities suggests they are being caused by a combination of factors:

• The majority of the cuts would appear to be impacting ‘local services’ such as social care, youth services, libraries, whilst ‘national functions’ such as government departments, military bases and protected entities like the GLA – largely concentrated in London and the South East and under the noses of decision-makers – seem better shielded from such extensive job losses.

There may also be a small effect from jobs once located in the regions through government offices and regional development agencies being relocated back in Whitehall.

• Also, councils in London and the South East were much less affected by local government funding cuts as a proportion of their total spending than councils elsewhere and have been able to deal with cuts without the significant redundancy programmes or jobs freezes seen in Northern cities.

• More widely, analysis of the recruitment websites suggested that many of the new jobs created in London and the South East have been in education – the large majority being in schools – health and social care. This reflects the wider demographic changes in the UK and the growing ‘0-15s’ and ‘65+’ age groups in London and the South East with their particular needs for schooling and health and social care.

All of this points to the challenges the government faces in trying to rebalance the economy in an era of austerity and with growing population pressures in the South.

Without a greater focus on spatial rebalancing and the significant decentralisation of central government functions away from Whitehall both employment and demographic patterns are unlikely to shift.

IPPR North is currently running the Northern economic futures commission which will bring forward a ten year strategy for economic growth in the North of England. In the meantime, the government’s emerging ‘cities’ agenda presents the best bet for the rapid disbursal of economic development powers to the Northern regions.

We will be hosting a conference on this subject on December 8th in Leeds – more details on www.ippr.org/north

• Beyond London and the East, the UK is suffering an ‘Osborne jobs deficit’ – Kevin Meagher, August 18th 2011

• It’s fairer up North but inequality is rising across the board – Jenni Viitanen, February 22nd 2011

12 Responses to “Public sector jobs are growing in London and the South East; here’s why”