The economy has done even worse than Osborne's critics on the left feared - and now we all have to pay the price. 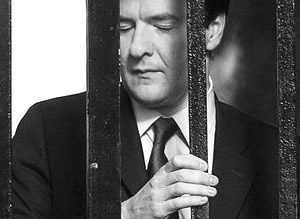 Over a year ago, I co-authored a pamphlet for Compass called ‘The £100bn gamble’ in which we argued that Treasury growth forecasts were wildly optimistic (eg, 2.4 per cent for 2012).

“if we fail to grow and instead bump along the bottom at a growth rate averaging 1.3 per cent … over the next five years, we would lose 6.7 per cent of GDP in growth foregone, which is £93.8 billion over the course of this government”.

The Office for Budget Responsibility (OBR), while pessimistic about this year and next, must be counting on heavenly intervention; it forecasts a healthy 2.6 per cent average for 2013-15, premised on a return to strong growth by the core Eurozone countries.

Should the latter not occur, and most observers agree it won’t, the UK economy will most likely stagnate over the entire life of this Parliament.

Every bit of new evidence published since the Compass pamphlet on the £100bn gamble appeared suggests Osborne has lost his bet. All the revisions point downward. He is shifting small sums around to give the illusion of chasing growth.

In fact, what Osborne wants is what the City of London has always wanted: near zero inflation, low borrowing rates and no Tobin tax. When it comes to social costs such as greater child poverty, shrinking social services, an extended wage freeze, growing unemployment, frankly, Osborne and his banker friends don’t give a damn.

According to the National Institute (NIESR), Britain is experiencing a longer depression than in the 1930s. Today, like millions of others, I’ll be marching with the unions. How many members of Labour’s shadow cabinet will join us I wonder?