Mike Morgan-Giles shows how the reaction to Occupy London is emblematic of the response to protest in the UK today. 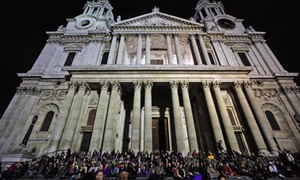 Occupy London today said “let the G7billion decide our future, not the G20”, as, despite the wishes of some, the protesters camped outside St Paul’s remain; at the weekend Mike Morgan-Giles went down to St Paul’s

On Sunday, I spent a couple of hours checking out the Occupy LSX protest at St Paul’s.  It has been a whirlwind couple of days since then at the camp, including clergy resignations, threats of legal action and Halloween stunts.

However, what has been most significant is perhaps the establishment’s opposition to peaceful protest. This continues to be framed in the guise of “of course I support the right to protest, but…”

Usually the “but” is followed by a statement expressing hostility to the existence of tents and a narrative which attempts to negatively represent the protesters. This is a tactic intended to try to sway public opinion away from the protesters. Of course, these attempts should in the main be disregarded.

If the tents were removed the establishment know full well that this puts an end to the protest – as it is not safe or reasonable to have scores of people sleeping rough to maintain their vigil.

Others say that protests have ‘beginnings and endings’, with an implication that they shouldn’t go on for too long. This stance however fails to comprehend the reasons why the protest began in the first place. Many protests develop to show opposition to a policy usually forced upon the people – and therefore it’s completely legitimate for them to continue until the policy has ended.

To this end, for example, it’s likely the majority of the protesters will leave the road opposite Parliament once all of our troops are brought home from the Middle East.

However the freedom to protest is being slowly eroded.

Just a couple of days ago, protesters opposed to changes in squatting laws failed to alert the authorities their protest was within 1km of Parliament. Such a need became legally required as part of the Serious Organised Crime and Police Act 2005. However this rule appears to infringe upon the right to protest and restricts freedom of association.

Kettling also continues to be used by the authorities to illegitimately prevent rights of liberty and movement – and we saw this during the start of the Occupy LSX protest. Others are seeking to introduce the use of illiberal methods of force, such as water cannons, sprinklers plastic bullets and tear gas.

Next on the agenda for the establishment is the use – or rather abuse – of technology to achieve their aims. Ideas that in fact wouldn’t look out of place in a totalitarian state – such as banning social media, cutting off phone networks and even monitoring people’s movement through GPS tracking.

Instead, protests should be approached from a completely different angle.

The police should be marshalling protests with the aims of collecting and utilising genuine intelligence and then acting upon this with moderation and public approval.

Politicians should seek to understand why a protest has developed, and perhaps even take the time to meet with the leaders.  Doing so can bring down barriers between elected representatives and the people, and can lead to conciliation, trust and understanding. The media need to approach all protests with an open mind and a willingness to seek the facts.  This is how they can make a genuine contribution towards our democracy.

However, all of this is not enough.

In the case of Occupy LSX for instance, there are now more people in support of the protest (39 per cent) than there were supporting the Conservatives at the last election. People across the world have shown solidarity – with similar protests in 951 cities in 82 countries.

These circumstances therefore dictate that attempts should be made to understand the future goals and aspirations of the protesters and to provide a considered response. Unfortunately with Occupy LSX, many have wrongly characterised the protest as either a representation of nothing in particular or as simply an attack on capitalism.

In fact, their paper ‘Towards Co-ordinated International Action’ – which was freely available on Sunday – has 36 aims – with the vast majority all focussed around increasing fairness and regulation within our existing capitalist system.

These include wealth taxes, financial transaction levies, an ending to tax havens and an extension of co-operatives – all of which are mainstream ideas in the political debate. Many of the Occupy LSX protesters are principled and they maintain broad public support for their goals. The Church appreciated this, and acted accordingly.

It is now for others to decide whether they seek solutions through conciliation or problems through incitement.

16 Responses to “Seek solutions to protests, not problems”