Are low bond yields good news? Not really: Cormac Hollingsworth explains that, although they can be a representation of belief in a government's ability to pay back debt, in this case they merely represent the dearth of alternative investment options. 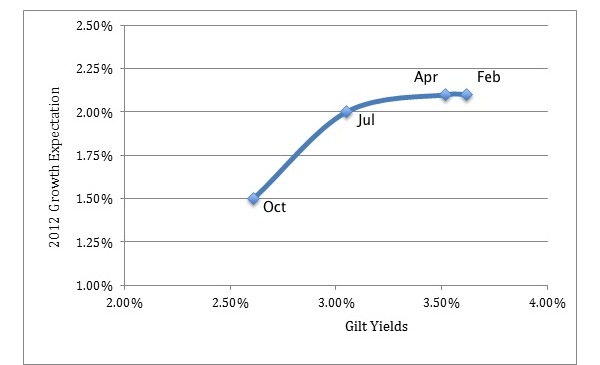 It’s getting tiresome listening to the lazy journalists supporting Osborne’s boasts about how much more credible the coalition’s deficit reduction strategy is the more yields on government bonds such as gilts fall. While unemployment rises, and growth continues to stutter, hacks believe Gideon’s claims that somehow the fall in the interest rate in government debt means that the coalition are on target to cut the deficit.

The facts are the complete opposite. The City has not fallen madly in love with the government’s policies. Actually, the explanation for the lowest gilt yields in 50 years is that the outlook for growth is so bleak that everyone is seeking refuge in government bonds, traditionally the safest form of debt.

To illustrate this, I’ve graphed the level of gilt yields versus the HM Treasury’s summary of the City’s forecast for 2012 growth. The forecast has been collected since February this year, and I graph the forecast for February, April, July, and October together with the gilt yields for the end of that month.

As growth expectations for 2012 have fallen (vertical axis), 10 year gilt yields have also fallen (horizontal axis). This is consistent with the panic view. But what’s happening to the City’s predictions for borrowing?

The HM Treasury surveys ask for a prediction for government borrowing for both 2011/12 and 2012/13, so we can graph financiers’ expectations of the total borrowing for those two years versus gilt yields. And unfortunately, the conventional newsroom wisdom is wrong. Over the course of this year, ever-lower gilt yields have been associated with ever higher expected borrowing for the next two years. 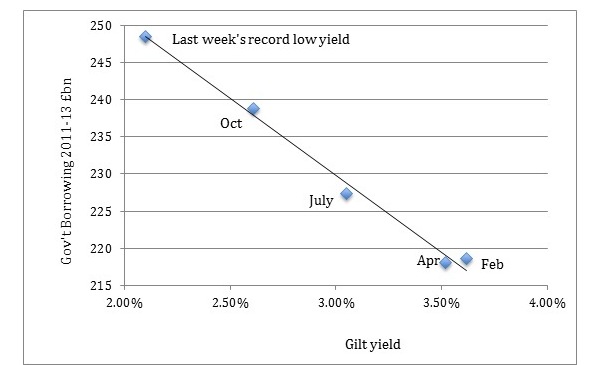 How does this relate to comparisons to the yardstick for bad practice, Greece, whose high rate of government debt is meant to show, in contrast, how successful our own macroeconomic policy is? In that country, the predictions for borrowing went from 16.0 per cent of GDP in March to a whopping 29.4 per cent in July. That is not a mere increase, but a categorical change. It brought Greek debt from manageable to unmanageable levels.

In the UK, where borrowing predictions increased by just 0.6 of GDP between April and July, we can see the simple linear relationship shown in the graph above. We’re not talking about huge nasty surprises in the space of three months, and so the City responds accordingly: the gilt yields lower, and the government borrows more.

In fact, 10 year gilt yields got as low as 2.10 per cent last week. And George Osborne will probably be celebrating this new found rise in his policy credibility. He should be more cautious.

If we plot that 2.10 per cent on our graph above, it predicts loans for 2011 to 2013 of £248 billion. That is a full £43 billion more borrowing over those two years than George Osborne promised in the June 2010 emergency budget.

The reason is that low growth is causing both higher borrowing and lower gilt yields. So in a way it’s true that coalition policy is affecting the gilt market. It’s just not doing so with a credible deficit reduction strategy, because it has no such thing.

27 Responses to “No, Gideon, low gilt yields aren’t good news, and here’s why”