Sally Hunt writes about her and her members’ perspective on the strikes. 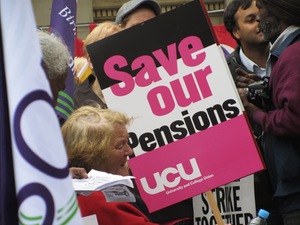 Next Wednesday, barring a last minute agreement, millions of public sector workers will go on strike in defence of their pensions.

Ministers should stop spinning and start negotiating if they want to avert the largest day of co-ordinated action in a generation. So far this week they have blamed everything but the weather on the wicked trade unions. If it starts raining though, expect to see Brendan Barber put in the frame for that too.

The real problem is that the current government simply does not understand trade unions and how they work.

One day they offered us a 15 minute strike “for free”, completely misjudging the anger there is among staff about the pension proposals.

The next, the prime minister – himself with a rather shaky electoral mandate – is lecturing us about whether 80 per cent plus strike votes are sufficient to call for strike action.

Yesterday, we were accused of destroying the economy – a job the government seems to be doing quite nicely on its own, thank you very much.

The problems our country face are too serious for this silly spin. Trade unions did not create the crisis. Nor did they invent the current, unjustified attacks on their pension schemes.

The arguments are well rehearsed but are worth repeating. Our pensions are not gold-plated. Our members are not responsible for the economic crisis. And what should be a shared goal across the political divide of a dignified retirement for all will not be helped by attacking best practice and celebrating the worst.

UCU members are far from mindless militants. They choose to work in education, despite the relatively low pay compared to the private sector, because it is their vocation. Strike action will always be, quite rightly, a last resort for them but after 12 months of “take it or leave it” what else should they do?

I, and others, have spent the last few weeks working for a negotiated settlement.

This week though has shown that negotiations are clearly a secondary priority for a government that prefers to do its talking on the news channel – failing to understand that every new PR stunt reduces the trust that public sector staff have still further.

Despite all this UCU will continue to work for a negotiated solution if one is possible. We are far from the “reds under the beds” portrayed by government. We are decent people; public servants who prefer to be at work supporting the next generation than being on the picket line.

Rather than continuing his search to find someone to blame for the impending strike on 30 November, the prime minister should stop, pause and look in the mirror.

• Osborne’s attacks on pensions are based on ideology, not necessity – Dave Prentis, July 25th 2011

25 Responses to “Message to Cameron: Talk to us, not TV news”