Kevin Meagher argues that, regardless of how human the Iron Lady film makes her look, we should never forget the corrosive effect Margaret Thatcher had on Britain. 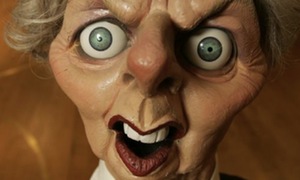 In the 2004 remake of The Manchurian Candidate, Meryl Streep plays a megalomaniac who leaves a trail of human destruction and misery behind her in her bid to secure political power on behalf of shadowy US corporations.

The casting director must have thought she was a natural, then, to portray Margaret Thatcher in The Iron Lady, the forthcoming biopic of our hated former prime minister which is due out on January 6th.

To most of us, her dismal record in Downing Street is familiar enough; save to say that her timelessly resonant claim that “there is no such thing as society” was especially true if you happened to live in a tightly-knit mining community or industrial heartland, or pretty much anywhere in the northern half of the country.

“…she was never, in my experience, the half-hysterical, over-emotional, over-acting woman portrayed by Meryl Streep.”

“I can’t see the point of this film. Its only value is to make some money for Meryl Streep and whoever wrote it. I have no interest in seeing it.”

Over in The Sunday Times News Review, India Knight argued that the film “humanises [Thatcher] completely” which “forces us to examine our own prejudices”. This in turn should prompt nothing less than a “re-evaluation” of Margaret Hilda Thatcher.

Although stating her personal dislike of Thatcherism, Knight nevertheless falls for the oldest canard:

“She was a grocer’s daughter, she was a woman; she became prime minister. The odds were stacked against her, and then some, but she did it anyway.”

But a focus on Thatcher the woman/mother/underdog etc risks missing the point.

Her novelty was not in her gender, or that she was a relative outside in the Conservative party; her real significance was that she was an unremitting ideologue hell-bent on repealing half a century’s worth of progressive social and economic reform.

That she was our first woman PM is trite; her true legacy was the egregious effect her policies had on ordinary people – especially women.

Abroad, her belligerence resulted in Britain’s increasing isolation, not its glory. Ironically, her most significant move was to sign-up to the Single European Act in 1986; responsible for the greatest acceleration of European integration since the Treaty of Rome.

At home, Thatcher’s malign legacy endures. Sunday’s papers carried a story about the government’s intention to curb the cost of free school milk, claiming that some suppliers are charging too much – although they failed to provide a shred of proof for the claim. Thatcher “the milk snatcher” would be proud of them.

But it is perhaps in the sad death of Basil D’Oliveira, the mixed-race South African cricket legend who came to personify the dignified struggle against Apartheid, which best reminds us that Thatcher’s record should never be viewed through rose-tinted spectacles.

Many decent people from across the divide in British politics supported the aims of Nelson Mandela and the African National Congress (ANC) through those dark days of ‘whites-only’ rule in South Africa.

But not Thatcher. She regarded Mandela and the ANC as “terrorists” – a sentiment just as vile and wrong-headed back when she was in power as it is today. Indeed, David Cameron made it an early mission of his leadership to denounce her for it.

For the millions of ordinary Britons who endured eleven years of her wretched reign, Margaret Thatcher will endure in our memories as a woman seemingly inured to the cruelty of her policies. Oblivious to the social collapse she presided over. Utterly disregarding of the misery she brought to so many lives.

Even a brilliant actress like Meryl Streep, with all the poetic license Hollywood brings to these things, cannot whitewash her record:

Economic inequality and social decay. An economy rigged in the interests of the few while the many struggled to cope. £200 billion of privatisation and North Sea oil receipts frittered away paying the benefits bill of the mass unemployment she created.

Streep’s earlier Oscar-winning hit, Kramer Vs Kramer, told the story of a family divided against one another. Mrs. Thatcher managed to do that to a whole country.

No “re-evaluation” of The Iron Lady is warranted. Let her reputation rust.