Tom Brake MP, chair of the Lib Dem Parliamentary Policy Committee on Home Affairs, explains the progress made by the coalition govt. in ending child detention. 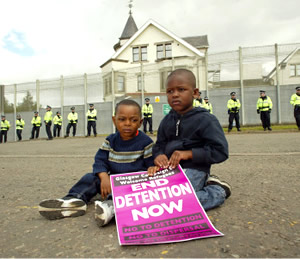 Contrary to Lisa Nandy MP’s comments on these pages on Tuesday, the Liberal Democrats are proud of the central role we have played in delivering the coalition government’s commitment to end pre-departure child detention and we have delivered big time.

In 2009 (pdf) under Labour, more than a thousand children were held in pre-departure detention; in August 2011 (pdf), there were just three children detained under immigration powers.

The Children’s Society recently acknowledged the progress the government has made on tackling the number of children held in pre-departure detention. (They have welcomed the progress made by the government in response to the Outcry! campaign by pledging to end detention and the closure of the family unit at Yarl’s Wood where children were held for weeks).

Gone are the days when they are locked behind bars in horrendous conditions. However, I do recognise we must now focus with the same determination on the detention of children, who have arrived at our ports or airports, either accompanied by their families or alone.

Detention in these circumstances cannot be avoided entirely. If we are to ensure our borders are secure and to reduce the risk of child trafficking, we need to be able to detain people for short periods of time. Families denied entry to the UK are usually returned within 24 hours and on average children are held for 10 hours. For children, 10 hours detention is still too long.

This must be cut further to minimise distress. That more can be done to make our immigration system more humane should not deflect from the progress that has already been made.

“The new arrangements are a complete humane, liberal revolution.”

It is time that Labour recognised the progress the coalition government has made to end child detention. Perhaps then we can work together to improve the system further.

n.b. September’s figures are now available (xls); they show an increase, but most of the children are in Cedar House which is significantly different to a detention centre, is operated in conjunction with Barnados and families can only be sent there after their cases have been considered by the Independent Family Returns Panel to ensure the welfare of the children has been taken into account.

• When will the coalition deliver on its pledge to end child detention? – Daniel Elton, September 8th 2011

13 Responses to “Lib Dems: We *are* delivering on our End Child Detention pledge”