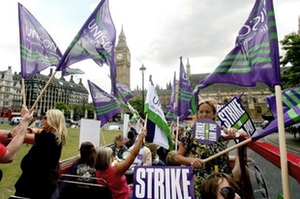 Boris Johnson was blustering away in the Telegraph this morning about the strikes due to occur this Wednesday. What is fascinating is what Johnson refers to “one statistic that is eloquent of the underlying reality in the dispute.”

Only about a third of union members even took part in the ballot. Of the 1.1 million members of Unison, just 29 per cent could be bothered to vote at all – and since only 78 per cent voted in favour, we have a strike triggered by less than a quarter of union membership.

Why such apparent apathy?

What an interesting question for Boris Johnson to ask.

You may remember, of course, that Johnson was elected Mayor of London in 2008. He gained 42.48 per cent of the first preferences in London, on a turnout of 45.33 per cent. So London has a mayor triggered by less than a fifth of the voting population – just 19 per cent.

Even if we allow him second preferences (he is, of course, elected through AV, something he believes is “just about tolerable” in London), he got 24 per cent of the electorate expressing any positive feelings about him at all. Less than a quarter.

The prime minister has also been outspoken about these strikes. Asked at prime minister’s questions whether strikes should be banned unless 50 per cent of union members voted for them, he said:

“Just one quarter of Unison members voted to strike, just 23 per cent of those balloted at Unite voted in favour.”

• What kind of “civil disobedience” tactics will the unions use? – September 15th 2011, Dan Whittle