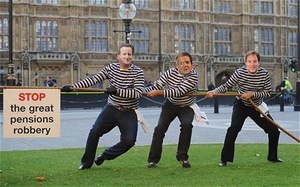 John Hutton has an opinion piece in the Telegraph today in which he repeats his politicised claims on the “sustainability” of public sector pensions.

In an increasingly uncertain age, people naturally want to ensure that when they retire, they will still enjoy a reasonable standard of living. Yet as we all live longer, and our savings have to last longer, this is becoming increasingly difficult.

In 1955, a teacher retiring from the public sector could expect to live for another 16 years. Today, that figure is 29 years and rising. On one level, this is obviously excellent news – and the simple fact that we are living longer certainly does not mean the end of the world as we know it.

The downside is that to date, all of the extra costs associated with increased life expectancy have been met by taxpayers, rather than the members of the pension schemes. The system must adapt to these changes, or run the risk of implosion.

Public sector pensions already cost the taxpayer £32 billion a year. These costs have risen by a third in 10 years, and are set to go on rising. There is a compelling argument for managing these costs in a more sustainable way.

Public sector pensions are, however, already sustainable. We know this, because it is in Hutton’s own report, as Stephen Henderson wrote for this site in July:

The Office of Budget Responsibility’s July 2011 Fiscal Sustainability report (pdf) looks long into the future (2060) and guesses at the likely proportions of GDP that might arise as the population becomes more elderly.

The assumptions are based on current policies, not government proposals. Confirming earlier findings in the Hutton Report (pdf), they clearly predict the cost of public pensions will fall from 2% of GDP to 1.8% in 2030 and 1.4% in 2060 – without any of the current Hutton proposals. Following this revelation, Hutton attempted to clarify his argument.

He wrote in September:

[In the report] I was trying to talk about sustainability. That can be measured as total cost proportion of GDP. Affordability is a different judgement, a political judgement.

Hutton himself has demonstrated that pensions are sustainable. Affordability might not mean what you think it means. Public sector pensions are unaffordable, according to Hutton, if they are higher than private sector. This is the first point of Hutton’s Terms of Reference, which states that the Commission is to have regard to:

As we argued in October:

Public sector workers striking to protect their pensions isn’t just good for them; it is good for all of us who work, because it ensures that the private sector can’t get away with offering the minimum possible. If reform is to come, let it come to the private, not public, pensions.