A new report says the government’s central message that reducing the budget deficit and debt levels will enhance economic growth is a “myth”, reports Ed Jacobs. 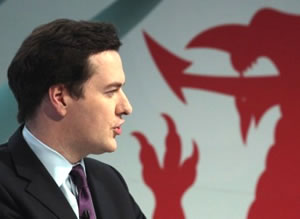 A new report says the government’s central message that reducing the budget deficit and debt levels will enhance economic growth is a “myth”.

In its regular Economic Commentary for November, the Fraser Allander Institute at Strathclyde University concludes (page 13):

“…cutting government spending may lower interest rates to some degree as well as input costs, including wages, for the private sector. Some boost to demand may come from that.

“But it will be more than outweighed by the loss of output and jobs caused by the cut back in government spending.”

Focusing on the euro crisis, meanwhile, the report warns the reluctance of the European Central Bank (ECB) to act as a lender of last resort will lead to the eventual break-up of the eurozone as we know it.

Under a section in which it describes as a “myth” suggestions “fiscal and structural reforms in the periphery will solve the current problems of the eurozone”, the Institute concludes (page 15):

“If the ECB acted as a lender of last resort it would start to buy individual sovereign bonds where there was a market shortfall. This is what the Bank of England would do in the UK or the Fed in the US.

“However, to fulfil this function would require the ECB to print euros and hence increase the money stock. Given German sensitivities over inflation this is unlikely to happen and so the EZ crisis will continue until eventual breakup and reconstitution in some new form with perhaps a core Germany, France, Holland, Belgium, Luxembourg monetary union.”

In a side swipe at both David Cameron and George Osborne, who at successive summits have sought to heaped the blame on the euro-crisis for the UK’s anaemic growth, the report concludes (page 16) it is a “myth” Britain’s current weak current growth performance is a consequence of the eurozone crisis.

“There is a sense from some of the comments of UK government ministers to recent UK growth figures that the crisis in the eurozone is being blamed for the current weakness of UK growth.

“While it is certainly the case that the crisis is affecting confidence and may be leading to a reluctance to invest by some companies in the UK, the reason for a loss of confidence is that the crisis portends the risk of sovereign default, contagion to other sovereigns, bank runs, bank failures, and a drop in aggregate demand and GDP.

“If and when any of those events occur then the harmful impact on the global economy, including the UK, will be dramatic.

“But in the meantime the explanation for weaker UK growth largely rests at home: the continuing consequence of the debt overhang for household spending, low expectations of growth by firms leading to weak investment, insufficient pickup in net exports and the impact of the sizable fiscal consolidation.”

And turning its attention to prospects for the Scottish economy meanwhile the report (page 20) revises down its forecast for economic growth north of the border in 2011 from 0.8% to 0.4%:

“This is due to rapidly falling household consumption indices, suggesting (for the UK, and by implication Scotland) a rapid falling off in consumer confidence since the summer months and a worsening global (particularly eurozone) economic environment which has seen unprecedented declines in business activity and confidence during the second half of 2011.

Commenting on the report’s conclusions, Brian Ashcroft, Professor of Economics at the University of Strathclyde, and one of the co-authors, warned:

“Sadly, the weakening in the global economy that we feared in June has come to pass, leading us to half our forecast for Scottish GDP growth this year. Our central forecast is for growth to continue, just. But the avoidance of recession as the crisis in the Eurozone deteriorates is becoming less and less likely.

“It is a tragedy that the Eurozone crisis, which threatens the well-being of the whole global economy, is worsening when clear policy solutions exist. That they are not being adopted is due to national hubris and policy error on a grand scale.”

While for Scotland’s finance secretary, John Swinney, the Institute’s findings highlight the need for the UK government to adopt a Plan “MacB”, before going on to argue the Scottish Parliament and government should be given much greater powers to stimulate growth.

However, whilst much of the attention is clearly concentrated on the UK government, in their opinion pieces, the Scottish press have said the report is also critical of the SNP’s policies.

In its leader column, the Scotsman says:

“If there is a “Plan MacB”, it isn’t working. While construction was stronger in Scotland over this period, service sector growth was just 0.1 per cent, compared with growth of 1 per cent in UK services. Within this total, business and financial services in Scotland are now showing particular weakness.

“Bleak though all this is, the institute warns the economy may be much worse off than suggested by the shorn estimates, due to permanent loss of output.

“There is little here to give the SNP administration any comfort, while the slowdown in the eurozone offers little prospect of any export-led recovery. The report itself could have been more forthcoming on policy suggestions rather than its contentious dismissal of key economic concerns as “myths”.

And commenting on the SNP’s repeated claims that somehow giving Scotland greater powers over taxation and economic policy would result in all being well north of the border, the Herald declares in no uncertain terms:

“Brave words but come the next election, voters will judge it on whether Scotland has weathered the chilly economic climate better or worse than the UK as a whole. So far the evidence is unconvincing.”