Three months on, Ben Mitchell goes through what we now know about the reasons for the riots. 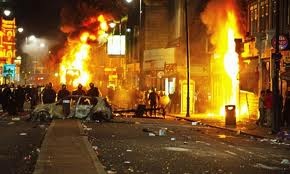 Back in August, little more than 24 hours after calm had finally descended on our chaotic and debris-filled streets, I wrote that it was perfectly reasonable to believe that opportunism and copycat criminal activity could be blamed for fuelling the rioters, looters and other troublemakers.

I also remarked that whilst this may have helped provide us with an initial explanation, this would never satisfy in terms of seeking out long term and lasting solutions. A complete picture as to who the rioters were, and why they behaved as they did was needed.

The last few weeks have begun to shed some light, with the release of three separate reports, all offering an insight (and very often, an unsurprising one) behind what has become known as “the England riots”. The focus on young people is most compelling.

The first and second reports came out towards the end of October: Ministry of Justice (MoJ) and Home Office studies, released concurrently, which gave a statistical analysis of who the rioters were and exactly what crimes were committed.

Crucially, it delves into their socio-economic backgrounds, with a glance at educational attainment and past criminal activity. I will return to both of these reports later.

The third, published last week, was a government-funded one, carried out by a group of independent researchers and commissioned on behalf of the Cabinet Office. It is this one that I’ll deal with first.

The study sought, as its main premise, to understand why some young people got involved in the trouble, whilst at the same time investigating why others chose not to.

Statistics have already revealed that half of those caught up in the riots were under-20, with just over a quarter of those between the ages of 10 and 17.

Taken from an admittedly small sample of just 206 young people from the affected areas, of which only 50 were actively involved in the disturbances, it found that a cocktail of excitement and opportunism, together with a desire to get back at the police, drove the disorder.

The researchers speak of ‘moments of madness,’ and ‘a day like no other, when normal rules did not seem to apply.’ Some of the young people described the thrill and the buzz of what took place as being akin to a rave.

This was a chance to get their hands on “free stuff;” the materially inaccessible and out of reach kind of stuff. Witnessing the events on TV, online, egged on by friends/associates via social media, brought many in from being mere ‘watchers, bystanders,’ to active ‘looters.’

Opportunism, thus, played its part, no doubt with the view that many felt they could get away with it, thanks in no small part to the images circulating of the police in certain areas, in cordons, standing and observing, rather than intervening.

A series of ‘nudge’ and ‘tug’ factors were found to determine young peoples’ level of involvement.

Those quizzed referred to being bored, with ‘nothing else to do,’ as a ‘nudge’ factor, with previous negative experiences of the police a significant one. In fact, hostility towards authority figures in general was regularly cited.

‘Tug’ factors such as peer and family pressure played their part:

“The strength of parents as inhibitors depended to some extend on whether they were around or not…and on the degree of their control.”

A young person’s criminal past acted both as a motivator and a deterrent. Current education, future job prospects and aspirations also came into play. With youth unemployment at 21.3 per cent, the highest since records began, and well over double the overall national rate, many were right to wonder what kind of future lay ahead.

Unsurprising, therefore, that the findings showed that:

“…some young people felt that their prospects were so bleak that they had little to lose by their involvement.”

As opposed to this young person from Peckham who chose to stay away:

“I was inside planning my future. I couldn’t see myself out there. It was stupid.”

A wake up call for our politicians if ever there was one.

The Ministry of Justice report was concerned with providing data and information regarding all the perpetrators brought before the courts, whereas the Home Office one relied on police data of all those arrested, as well as detailed accounts of crimes committed. Both were released a couple of weeks before, and serve to compliment one another.

In short, their scope was more interested in the who, rather than the why. They are, however, no less revealing.

In terms of criminal pasts, 76 per cent of those who appeared before the courts for the disorder had either a previous caution or conviction; 62 per cent for juveniles. Yet, almost a quarter of all offenders in court had no previous caution or conviction, thus lending credence to the view that a lot of the rioting and looting came from opportunists, rather than experienced, prolific criminals.

It is only by wading through the socio-economic and educational data that one sees a picture of poverty and deprivation, combined with academic failure. Almost two-thirds of 10-17 year olds up in court lived in one of the 20 per cent of the country’s most deprived areas.

The MoJ was unequivocal in its findings that:

Whilst the Home Office produced a ‘sub-set’ of those arrested, reproducing similar figures to the MoJ, it found something additionally noteworthy. Only 13 per cent were found to be affiliated to a gang, thus punctuating the gang myth propagated by Iain Duncan Smith at September’s Tory party conference, where he told delegates that gangs ‘played a significant part’ in the riots.

Not the first time (and it certainly won’t be the last) a government minister has jumped the gun, reaching for conclusions before all the facts are known.

The conclusion of all three reports should surprise few. The responses from young people as to why they rioted don’t reveal anything particularly new or groundbreaking.

Instead, they build upon much that has already been known about from earlier studies. The high-profile nature of August’s events meant that they carried even greater weight.

Yes, we know that opportunism, thuggery, mindless violence, took place on our streets, but past studies show that these things don’t just operate in a vacuum. The Cabinet Office report gives yet a further example of the simmering tension, anger, and frustrations at the lack of opportunities felt by the young.

For some, the riots were a release, no matter how opportunistic.

Many of those convicted of looting and handling stolen goods have received far stiffer punishments than normal, both in terms of going to prison and length of service being handed down. This was particularly the case for juveniles.

Juliet Lyon, director of the Prison Reform Trust, an independent charity which believes that prison should be reserved for only the most serious offenders, argued that while the reports’ figures were to be expected, they also showed that now was the time to tackle social deprivation.

Indiscriminate prison sentences were only going to be counter-productive:

“The worst possible outcome would be just to sling all these young people in prison and risk their joining gangs out of terror and becoming hardened criminals.”

Unfortunately, nobody in the government was listening.

• How social networking escalated rioting – and can bring it to justice – Daniel Elton, August 10th 2011

18 Responses to “IDS jumped the gun: Gangs had nothing to do with the riots”