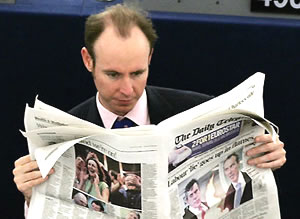 “There is now a gap both in pay and in pensions, that even now most people working the ‘real’ economy would kill for, and you cannot keep taxing the productive bit of the economy to sustain the unproductive bit.“

Somehow, he managed to make this claim in the same ramble that he criticised the lost revenue that the strike would cause. We’ve heard from Francis Maude that it could cost £500 million of damage to the economy.

Try to reconcile those two claims. The “unproductive” bit of the economy generates half a billion pounds of revenue per day. That’s over and above their salaries, which of course aren’t paid on the 30th because they’re on strike.

Trying to justify why the government should strip the public sector of their contracted pensions, Hannan said:

“Lets just remember why we’re in this mess.

(Because the banks went bust?)

“Out of every 4 pounds that the government is spending, one of them is being borrowed. The state is already spending more than half of our total GDP.

“We just can’t afford to carry on with this.

“So it’s not really a question of – in a sort of playground way of “who started it,

this is unfair”, and so on – we simply don’t have the option of not making savings.

“And if you don’t believe me, look at what’s happening in Europe, on our doorstep with those countries which haven’t lived within their means, and look at the chaos it’s installed.”

(Of course, all of those countries are also members of the euro, which renders their financial situation markedly different from our own. A better comparison might be the USA, which grew three times as much as us in the last year)

Sometimes, however, it seems like Hannan will use any excuse to attack his personal bugbears.

As the panel turned to the bizarre letter written by a burglar to his victim, Hannan brought out this belter:

What goes through his head? “We’re talking about Victim Support? Let’s attack government performance in heavy industry!” Besides which, he should probably research Frank Whittle, the inventor of the turbo-jet engine, the Concorde, the first and only supersonic passenger plane, or the entire history of NASA.

21 Responses to “Hannan: Tough on knowledge, tough on the causes of knowledge”