Andy Atkins details Friends of the Earth’s plans to take on EDF’s massive profits off the back of public cash. 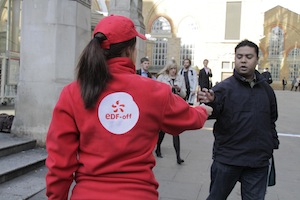 Andy Atkins is the executive director of Friends of the Earth

It looks like Christmas has come early for EDF as they announce substantial quarterly profits today. It’s yet another slap in the face for households struggling to pay their energy bills this winter. And it’s also another symptom of the sickness at the heart of Britain’s broken energy system.

Despite their surging profits, bumper bonuses and our sky-high bills, new renewables account for just one per cent of EDF’s investment plans. They have even been lobbying the government against renewable energy in recent years and have called for renewable energy targets to be lowered.

Whilst some commentators and politicians have tried to blame bill hikes on “green taxes”, the true cause is the rocketing price of gas and other dirty fuels.

The price of gas has increased by 90 per cent in the last ten years – and energy regulator Ofgem confirmed last month that this has had a major impact on our bills. Investment in renewable energy and cutting energy waste is the only way to stabilise bills in the long run.

We need to use a lot less expensive and imported gas to give consumers a better deal in the long run and to tackle climate change – and a lot less nuclear to reduce the risks and cost of dealing with nuclear waste. EDF is plotting with the government to build another round of costly new nuclear power stations, but this is really the last thing Britain needs.

Despite all the money spent on nuclear power over the years – at a cost of billions of pounds to the taxpayer – it still requires huge injections of public cash.

We need an energy system that will keep our lights on in the future without costing the earth. Which is why it’s particularly frustrating to see that the government plans to slash financial incentives for households and communities that install solar electricity, jeopardising thousands of jobs and countless clean energy projects across the country.

Friends of the Earth is preparing to mount a legal challenge over the plans unless the government amends their proposals.

So while EDF executives celebrate bumper profits, millions of families across the UK are facing yet another winter in fuel poverty. It’s hard to get into the Christmas spirit when you’re worrying about how to keep warm. It’s why Friends of the Earth will be outside EDF’s London offices today to pass on an unambiguous message that this can’t go on.

We urgently need to fix our broken energy system to build Britain’s renewable energy base, reduce fuel poverty, create jobs and ultimately ensure families have a better deal in the long run.

We all lost out because our politicians failed to stand up to the banks and the Murdochs. Friends of the Earth is urging them to stand up to EDF and the rest of the Big Six and make sure we have clean energy we can all afford.

42 Responses to “Christmas is coming and EDF is getting fat”