Trevor Cheeseman shows how the history of a Labour NHS was, far from the Conservative rhetoric, one of improving outcomes across the board. 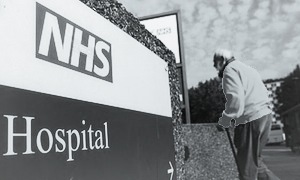 “If we had cancer survival rates at the average in Europe, we’d save 5,000 lives a year.”

But this fails to acknowledge that his survey data was 10 years old.

This was a familiar theme for Cameron – he also said at PMQs in 2010 :

Now a new research study, published in the British Journal of Cancer, exposes his position, and reinforces academics’ criticism at the time. It shows the NHS in England and Wales secured the biggest drop in cancer deaths and most efficient use of resources among 10 major countries worldwide.

“These results challenge the feeble justification of the government’s changes, which appear to be based upon overhyped media representation, rather than hard comparable evidence…

“The NHS’s performance on cancer is much better than the media presents. It challenges the government’s assertion that the NHS is inefficient and ineffective at treating cancer – an argument for reforming the NHS.”

The study shows the NHS was the most efficient country at reducing cancer mortality ratios once per cent of GDP spent on health were compared. The UK recently reached the OECD average spend on per person on health, after being below average for many years – yet has achieved the biggest overall annual fall in cancer mortality over the 27-year study period.

But it is not just cancer where clinical results show the NHS under Labour’s approach of collaboration, standards and planning delivering sustained improvement.

Stroke affects thousands each year: there are 110,000 strokes, over 20,000 so-called TIAs or ‘mini strokes’, and 300,000 living with significant post-stroke disability (the single largest cause of adult disability).

Labour’s national stroke strategy in 2005 began stroke networks nationwide (threatened by the coalition until an outcry from within the NHS) which have delivered sustained improvement in nine key clinical indicators.

“Care for people who have had a stroke has significantly improved since we reported in 2005. The publication and early implementation of the stroke strategy have begun to make a real difference and have helped to put in place the right mechanisms to bring about these improvements.”

It is a similar story for hip fracture care, affecting 60,000 people at year. Hip fractures are life threatening and life changing for older people (the average age of patients is over 80). Ten per cent die within a month and 30 per cent are dead in a year; for others it is the event that leads to nursing care and a loss of independence.

Under Labour, high quality care – getting people to the operating theatre promptly and ensuring a geriatric doctors shares their hospital care – was directly incentivised for hospitals, a major department of health campaign was run to highlight best practice, and a professional clinical audit system gave feedback on local results.

This audit system, the National Hip Fracture database (pdf), run by doctors’ organisations, commenting on a detailed subgroup of 28 hospitals:

As an integrated strategy that promoted systematic, universal improvement and planning rather than competition for business, the results have been significant.

Doctors hostility to the coalition’s reforms represent an Achilles heel, with a growing number starting to speak out. Cardiologist Roger Boyle, who led the services change sin stroke care nationally appeared on a platform with John Healy at Labour’s conference in September, and has challenged the coalition:

“All the improvements in cardiovascular care have come from collaboration and leadership. Where is the evidence that competiton between commercial providers makes a blind bit of difference to cost efficiency and quality? The competition I want to see is between clinicians vying with each other over whose service is the best.

I absolutely think the NHS is the best public service in the world. It is horrific that its future is threatened.”

From next year the Coalition’s philosophy of tolerating a postcode lottery when it comes to NHS standards will become clearer. They have spent time defining clinical outcomes across a range of important indicators, in something called the NHS Outcomes Framework – but they have dismantled the infrastructure to ensure delivery, and appear to be content for significantly different performance across the country.

When the battle of over the health and social care bill is concluded, the focus for Labour should increasingly be clinical standards as well as waiting times, where it has a track record of delivery.

When they take time to look at their own strategy for improving standards, some in the coalition may worry how threadbare it is, and how exposed they will be left when full-throttle market competition takes hold.

• Will Tories and Lib Dems betray their own words as well as the NHS? – Alex Hern, October 25th 2011

• Drug addiction should be a health issue not a criminal one – Caroline Lucas MP, June 16th 2011